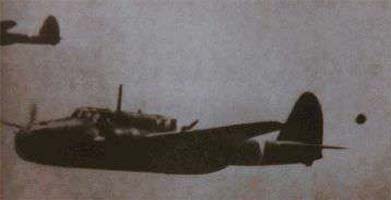 'Foo fighters' were mysterious aerial lights seen by aircrew on both sides in World War II, especially after 1943, and during the Korean War. Their name derives from the cartoon character Smokey Stover, whose catchphrase was: "Where there's foo there's fire." Many reports were made of balls of light, varying in color and in size from several centimeters to about 2 m across, moving in close pursuit of warplanes. A common assumption among Allied pilots was that they were some form of enemy invention such as reconnaissance drones. However, when enemy aircrew were interrogated, it became clear that both German and Japanese fliers had encountered the same phenomenon. As the minutes of the Scientific Advisory Panel on Unidentified Flying Objects in 1953 noted, "[T]heir exact cause or nature was never defined." The minutes also reveal that both the panel's chairman, H. P. Robertson of the California Institute of Technology, and another panel member, Luis W. Alvarez of the University of California:

... had been concerned in the investigation of these phenomena, but David T. Griggs (professor of geophysics at the University of California at Los Angeles) is believed to be the most knowledgeable person on this subject. It was their feeling that these phenomena are not beyond the domain of present ... physical science.

The same view was later espoused by Donald H. Menzel and Ernest H. Taves,1, 2 who suggested that foo fighters were light reflections from tiny ice crystals formed by supercold air eddying around battle damage on the aircraft. Another possibility is that they were akin to ball lightning. The significant point is that, like the "Los Angeles Air Raid" and Kenneth Arnold's sighting, foo fighters were not considered as an aspect of a single phenomenon until hindsight included them in the UFO canon. As the Robertson Panel in 1953 concluded, "If the term 'flying saucers' had been popular in 1943–1945, these objects would have been so labeled."