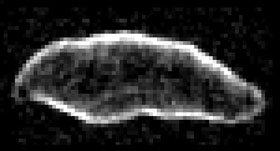 Radar image of Geographos from measurements by the Goldstone antenna of the Deep Space Network. Taken on Aug 30, 1994, at a range of 7,200,000 km. Credit: Steven J. Ostro, NASA/JPL.

1620 Geographos is an oddly-shaped member of the Apollo group of Earth-crossing asteroids, discovered by Rudolph Minkowski and his American colleague Albert George Wilson (1918–2012) at Palomar Observatory in 1951.

Geographos shows the most extreme variations in its light curve of any object in the Solar System: the amount of light it reflects varies by a factor of 6.5 over the course of an axial rotation. This indicates that Geographos is either very elongated – a cigar-shaped object viewed along a line perpendicular to its spin axis – or is a pair of objects nearly in contact that orbit each other around their center of mass (see binary asteroid. Possibly it acquired its strange form after being splintered off a larger body or by stretching through tidal forces produced during a past close encounter with Earth.

The asteroid's name was chosen to honor the National Geographic Society for its support of the Palomar Observatory Sky Survey.