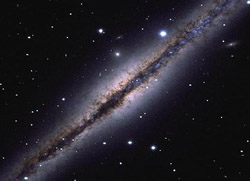 The galactic bulge is the spheroidal mass of stars that forms the central hub of spiral and lenticular galaxies – the yoke, if such galaxies are imagined to resemble fried eggs. The bulge diminishes in size relative to the galactic disk in the sequence of spirals Sa to Sd. Stars that populate the bulge are normally old, Population II objects, dating back to their galaxy's earliest period. Studying bulges can therefore tell astronomers about how galaxies formed and evolved.

According to one current theory, a spiral galaxy begins as a giant, roughly spherical rotating mass of gas and dust, which gradually flattens out at the edges to create the disk. The original spherical shape lives on in the outermost region of a galaxy, known as the galactic halo, and, to a lesser extent, in the bulge. However, this view is challenged by observations of some bulges. The bulge of the Triangulum Galaxy (M33), for example, contains young- and intermediate-age stars, and has a star distribution that suggests the disk goes all the way to the center. This raises questions about how M33 as a whole formed and what triggered the birth of the relatively youthful stars in its bulge.