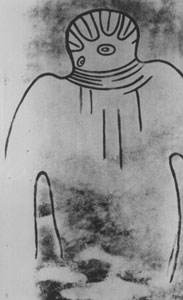 Henri Lhote was a French ethnologist and explorer who discovered important cave paintings at Tassili-n-ajjer in the central Sahara and wrote about them in The Search for the Tassili Frescoes, first published in France in 1958.1 A curious figure reproduced in this book (shown left) was referred to by Lhote as Jabbaren, the "great martian god." Although it transpired that this picture and others of strange appearance in fact represent ordinary humans in ritual masks and costumes, the popular press made much of this early paleocontact hypothesis and it was later borrowed by Erich von Däniken as part of his sensationalist claims of "ancient astronauts."