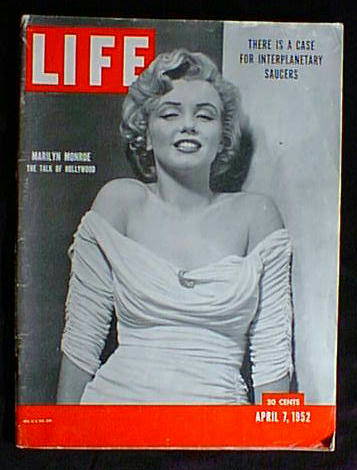 The Life article on UFOs was one of the most influential pieces of journalism in the early history of unidentified flying objects. It appeared in the Apr 7, 1952 issue of Life magazine, just four days after the US Air Force had issued a press release to announce that it would continue studying UFOs through the successor to Project Grudge, known as Project Blue Book. Under the title "Have we visitors from outer space?" the article cited an unnamed general in the Pentagon who "strongly believed flying saucers were interplanetary spaceships". In his memoirs, Captain Edward Ruppelt, head of Blue Book at this time, asserted that a number of USAF generals who privately endorsed the extraterrestrial hypothesis had unofficially encouraged Life reporters to promote the 'interplanetary aspect' and that these officers ranked "so high that their personal opinion was almost policy".1 The article in Life, together with scores of others it spawned in newspapers around the country, may have been an important factor behind the increased rate of reports at this time. In his book Watch the Skies!2 (1995) Curtiss Peebles describes the kind of feedback effect that may have been at work:

Life said the Air Force was interested in flying saucers. People would then be more likely to report a sighting. The new regulations meant that reports that might have been ignored or thrown away before were now sent to Blue Book. The open press policy meant that questions were not brushed off as before. This, along with the increased number of reports, resulted in more newspaper articles which caused people to watch the skies.