past conditions on Mars 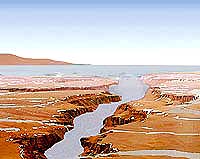 Mars was once a watery world.

Early in the 4.6-billion-year history of the solar system, the conditions on Earth and Mars were almost certainly much more similar than they are now. On both planets the primitive atmosphere is thought to have originated in large part from gases, mainly water vapor, carbon dioxide, and nitrogen, vented from volcanoes (see Mars, atmosphere). In Earth's case, far more water was released than the atmosphere could hold and the bulk of it condensed to form oceans which remain to this day. Evidence suggests that an ocean also formed on Mars (see Mars, water on), covering, according to some estimates, one-third of the planet's surface to an average depth of 1,700 meters (5,500 feet). Early on, large amounts of carbon dioxide in the martian atmosphere probably led to a vigorous greenhouse effect which kept the average temperature above 0°C. This fact, together with the substantial atmospheric pressure (perhaps similar to that presently found on Earth), would have enabled surface water to remain as a liquid. But whereas on Earth, ongoing plate tectonics have ensured that volcanoes and their release of fresh carbon dioxide play a crucial role in maintaining our planet's equable climate, on Mars the crust appears to consist of a single plate. Owing to its small size, Mars does not have enough internal heat to drive a significant level of tectonic and volcanic activity. Perhaps it did for a while when it was young. But after the martian volcanoes fell silent no new carbon dioxide would have been pumped into the atmosphere, and that which was already there would have been gradually depleted. As happens all the time on Earth, large quantities of atmospheric carbon dioxide were probably taken up by liquid water on the surface and converted into carbonates. Ironically, therefore, the martian ocean and rivers might well have been instrumental in their own demise for, as they removed more and more carbon dioxide, they would have brought about a lowering of the atmospheric pressure and a reduction in the greenhouse effect which had previously maintained the surface temperature above the freezing point of water.

Putting an accurate timescale on these dramatic changes in climate is not easy and researchers continue to argue over when and for how long Mars was warm and wet. The original, volcanically-vented martian atmosphere was probably in place around 4 billion years ago, toward the end of the period of heavy primeval bombardment. Judging by the structure of the valley systems and the extent to which some craters from the early bombardment phase have apparently been eroded by running water, a strong greenhouse effect must have persisted for about 500 million years. Even after this, however, some surface water presumably remained for a long time, continuing to remove carbon dioxide, in order that the atmosphere should have thinned out to its present extent. According to one estimate, the last dregs of the once great ocean on Mars disappeared some 3 billion years ago.

Whether Mars has had an occasional wet spell since is a matter of controversy. It may be that Mars experiences periodic ice ages as does the Earth and that, at present, it is in the midst of a prolonged cold snap. There could be a number of reasons for this. Variations in the tilt of the martian rotation axis, for example, are much more pronounced than in the case of Earth due to the gravitational influence of Jupiter. Another possible source of climate change could be fluctuations in the amount of solar energy reflected back into space by the martian polar caps. Wind-borne dust, which becomes trapped in the ice, causes the caps to darken and brighten on a seasonal basis. A gradual long-term reduction in the reflectivity of the poles could cause them to warm up and melt, releasing sufficient carbon dioxide to allow liquid water to exist again on the surface. (Some means of bringing this about artificially might one day be at the heart of a scheme to terraform the Red Planet.) Finally, it is conceivable that variations in the luminosity of the Sun have had their effect on Mars. Some of the channels, presumed once to have contained water, are pock-marked by occasional impact craters, the frequency of which provides a rough measure of the age of these particular channels – about 1 billion years, according to some estimates. This coincides more or less with the most recent era of high global temperatures on Earth, suggesting a common underlying process at work – a possible solar link.

In October 1999, researchers announced that, based on high-resolution images from Mars Global Surveyor, no ancient shorelines could be discerned and that, as a result, the case for past oceans on Mars had been weakened.