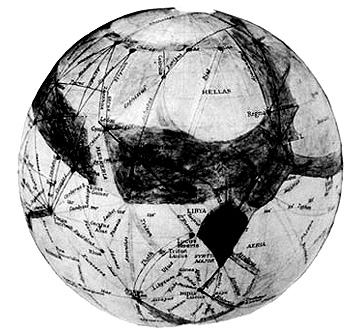 Percival Lowell's 1909 map of Mars showing canals as thin lines and "oases" as round blobs at the major intersections of canals.

The term 'oases' was used by Percival Lowell in 1895 to describe dark, round features on the surface of Mars which he claimed lay at the major intersections of a Martian canal network. These features had been referred to as "lakes" by William Henry Pickering in 1892. Lowell, however, believed they were extensive regions of vegetation irrigated by canal-borne polar meltwater. They were an important feature of his theory concerning an extant Martian civilization.