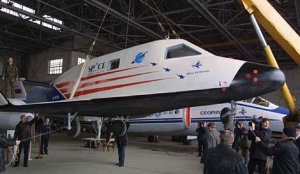 Space Adventures Ltd is an American company, founded in 1998 and based in Arlington, Virginia, which promotes space tourism and entertainment. It was responsible for organizing the flights of the first three space tourists in history – those of Dennis Tito in 2001, South African business Mark Shuttleworth in 2002, and American scientist and entrepreneur Gregory Olsen in 2005. As well as its involvement in arranging orbital flights, Space Adventures Ltd is developing a passenger suborbital space program, with licensed passenger flights scheduled to launch in 2007–2008. Its main rival in this field is Virgin Galactic. Space Adventures also offers a variety of training experiences that can either be booked separately or together as part of a spaceflight qualification program, zero-gravity parabolic flights, and high-performance, altitude, and g-force jet flights.

Space Adventures' suborbital fleet is likely to be based on the Russian Myasishchev Design Bureau's Cosmopolis 21 (C-21) vehicle. The Explorer vehicles will carry as many as five people into space, giving them an opportunity to peer back at their home planet for several minutes before returning to Earth. The C-21 is a rocket module that will hitch a ride on an aircraft called the M-55X to an altitude of about 20 km (12.5 mi). From there, it is air-launched and ignites its own engines to reach its maximum altitude.