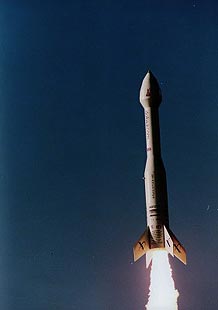 Starchaser Industries is a British rocket development company, founded in 1992 by Steve Bennett and based in Hyde, Cheshire. Team Starchaser competed for the Ansari X Prize with a design called Thunderstar/Starchaser 5 until the competition was won SpaceShipOne.

The largest rocket launched by the company so far is the 11-m high Nova, which reached an altitude of more than 1,600 m over Morecambe Bay in Nov 2001. Nova is the largest private civilian rocket ever built and flown in Europe. Other rocket series developed by Starchaser Industries include Discovery, Tempest, and Sharp.