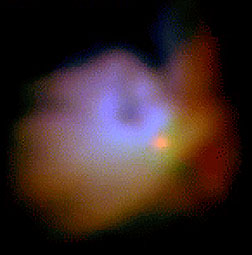 A T Tauri star is a very young, lightweight star, less than 10 million years old and under 3 solar masses, that it still undergoing gravitational contraction. It represents an intermediate stage between a protostar and a low-mass main sequence star like the Sun.

T Tauri stars are found only in nebulae or very young clusters, have low-temperature (G to M type) spectra with strong emission lines and broad absorption lines. They are more luminous than main sequence stars of similar spectral types, and they have a high lithium abundance, which is a pointer to their extreme youth, as lithium is rapidly destroyed in stellar interiors.

T Tauri stars often have large accretion disks left over from stellar formation. Their erratic brightness changes may be due to instabilities in the disk, violent activity in the stellar atmosphere, or nearby clouds of gas and dust that sometimes obscure the starlight.

Two broad T Tauri types are recognized based on spectroscopic characteristics that arise from their disk properties: classic T Tauri and weak-lined T Tauri stars. Classical T Tauri stars have extensive disks that result in strong emission lines. Weak-lined T Tauri stars are surrounded by a disk that is very weak or no longer in existence. The weak T Tauri stars are of particular interest since they provide astronomers with a look at early stages of stellar evolution unencumbered by nebulous material. Some of the absent disk matter may gone into making planetesimals, from which planets might eventually form. According to one estimate, about 60% of T Tauri stars younger than 3 million years may possess dust disks, compared with only 10% of stars that are 10 million years old. Infant star relatives of T Tauris include FU Orionis stars.

The nearest T Tauri stars occur in the Taurus molecular cloud and the rho Ophiuchus Cloud, both about 460 light-years (140 parsecs) away. They are named after the prototype T Tauri.

A T association is a grouping of T Tauri stars, up to several thousand strong, typically embedded in and partly obscured by the nebula from which it formed. It is one of the main types of stellar association. Examples include the Taurus-Auriga T Association, the nearby TW Hydrae Association, and Vela T1 and T2. Additionally, many T Tauri stars are found in other groupings not named as T associations; for example, at least 2,000 T Tauris are believed to exist in the Scorpius-Centaurus OB Association and a handful in the young open cluster Collinder 197. T associations gradually break up after 10 million years or so as the component stars go their separate ways. The recently-found and nearby Horologium Association, lying about 200 light-years away and believed to be about 10 million years old, contains at least 10 young stars of which half a dozen are characterized as post-T Tauri.