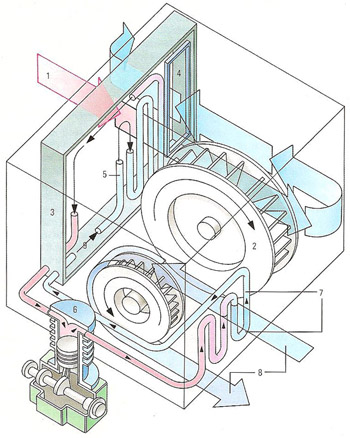 Warm air from a room (1) is drawn by a centrifugal fan (2) across the coils of a heat exchanger (3) and returned to the room through a filter (4). The cold liquid refrigerant at low pressure in the coils (5) is heated by the air from the room, evaporates, and passes to the compressor (6) where it is compressed. The hot, compressed gas enters a set of coils on the exterior of the unit (7) where it is cooled and condensed by a stream of outside air (8) drawn over it by a second fan, The refrigerant then passes through an expansion valve (9) into the interior coil. As the pressure drops the refrigerant cools, and the cycle begins again. 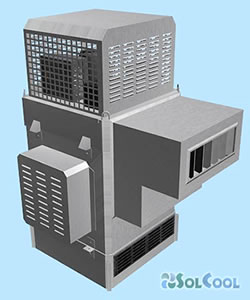 SolCool's hybrid solar chiller – a solar air conditioning system that uses a combination of 12V solar/back-up battery energy and 110-volt power. The unit can continue operation under the assistance of solar energy and back-up battery reserve for hours during power outages.

Air conditioning is the regulation of the temperature, humidity, circulation, and composition of the air in a building, room, or vehicle, to meet the requirements of the conditioned space.

The first commercial air-conditioning installation dates from 1902, when Willis Carrier designed a cooling and humidifying system for a New York printing plant. During the 1920s, motion-picture theaters and then office buildings, department stores, and hospitals began to install air-conditioning equipment. After World War II, home units became available resulting in the rapid growth of the industry manufacturing the equipment.