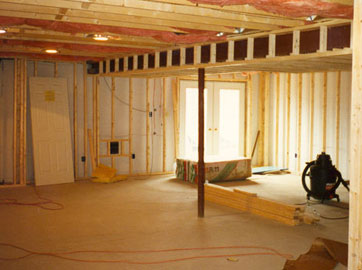 Basement R-values across US.

A properly insulated basement can help reduce your energy costs. However, basement walls are one of the most controversial areas of a house to insulate and seal. You need to carefully consider the advantages and disadvantages, not to mention moisture control.

Compared to insulating the basement ceiling, insulating basement walls have the following advantages:


The disadvantages of basement wall insulation include the following:

Adding insulation to the interior of the foundation is often more cost effective for an existing building. Interior insulation has the following advantages and disadvantages.

Once you have determined the insulation R-value you'll need for either adding insulation to an existing basement or new home construction, you can choose the type of insulation, including the following:


The installation of basement insulation will depend on the type you choose and the best way to control moisture in your particular climate.

When insulating any part of your home, you also need to consider proper air sealing and moisture control. Moisture control in basements is particularly important since they are notorious for problems with water intrusion, humidity, and mold.

Finally, you need to consider radon resistance or control when installing any type of foundation.