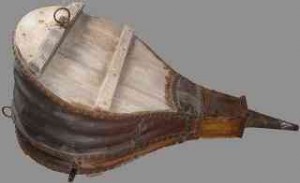 Bellows are a device used to produce a blast of air to speed the burning of a fire, or for musical instruments (accordions and organs). Bellows usually consist of two variously-shaped boards hinged at the nozzle end, and elsewhere joined by pleated leather sides. As the boards are opened, air is drawn in through a valve; as they are shut it is forced out through the nozzle. A blacksmith's bellows has two such chambers working out-of-phase, thereby ensuring a continuous flow of air.