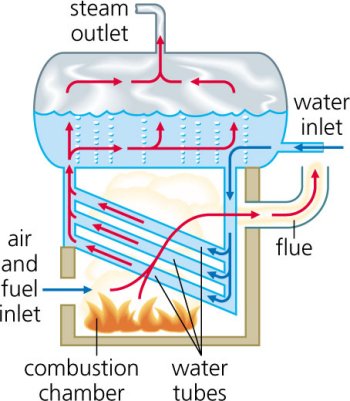 A boiler is a vessel or tank in which heat, produced from the combustion of fuels such as natural gas, fuel oil, or coal, is used to generate hot water or steam for applications ranging from building space heating to electric power production or industrial process heat.

A boiler system consists of two main parts: the furnace, which provides heat, and the boiler proper, a device in which the heat changes water into steam.

When 100% of the steam produced is returned to be reused, the system is called a closed system. Examples of closed systems are closed steam heating, hot water heating, and "one-pipe" systems. Since some processes can contaminate the steam, it isn't always desirable to feed the condensate back into the boiler. A system that doesn't return the condensate is called an open system.

In the case of a domestic boiler, steam is distributed via pipes to steam radiators, or hot water is distributed via baseboard radiators or radiant floor systems, or can heat air via a coil. Steam boilers operate at a higher temperature than hot water boilers, and are inherently less efficient, but high-efficiency versions of all types of furnaces and boilers are currently available.