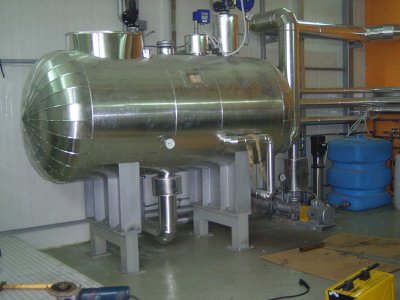 Boiler rating is the heating capacity of a steam boiler; it is expressed in BTU per hour (BTU/h), horsepower (hp), or pounds of steam per hour.

The oldest method of rating boilers, still used to rate small boilers, is by boiler horsepower. One boiler horsepower is defined as the ability to evaporate 34.5 lb. of water into steam at 212 °F and above. Large boiler capacity is generally given in lbs of steam evaporated per hour, under specified steam conditions. To convert boiler horsepower (hp) into lb. of steam, multiply hp × 34.5. Maximum continuous rating is the hourly evaporation that can be maintained for 24 hours.

When a boiler operates at its maximum rated capacity, it is referred to as maximum load. If the load varies from hour to hour, it operates at a varying load.