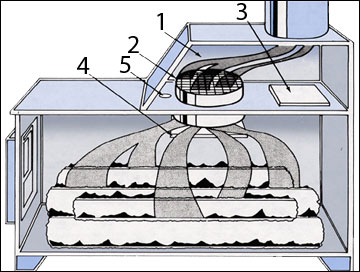 Cutaway sketch of wood stove with catalytic combuster. (1) Heat exchange chamber. (2) Catalytic combustor – the circular, honeycombed disk mounted in the baffle plate. Hot gases and smoke from the fire are forced through the catalytic combustor, at which time the combustible gases are ignited by the combustor. (3) Bypass damper. (4) Flame guard. Safety bypass opening

The ceramic honeycombed combustor in a catalytic stove is coated with a noble (non-reactive) metal, usually palladium. There are various sizes and shapes, but the most common combustor is wheel-shaped, 5¾ inches(14.6 cm) in diameter, and 2 inches (5.1 cm) thick.

The combustor causes smoke to be burned so that it doesn't escape up the stack unused. Gases given off by the wood will burn if the fire is 1,000°F (537°C) or higher. However, if the fire is turned down and the gases inside the firebox are less than 1,000°F, they won't burn. When the gases pass through the combustor, the noble metal acts as a catalyst and enables the gases to burn at temperatures as low as 500°F (260°C).

All catalytic stoves have a lever-operated catalyst bypass damper which is opened for starting and reloading.

This is usually done by a professional. Improper installation of your woodstove may cause greater pollution and even result in a house fire. It may also affect the draft of the stove – its ability to draw combustion air and expel exhaust. Proper draft is critical to reducing pollution and maintaining high efficiency. Before having your stove installed, be sure to check with local authorities regarding building codes and permits, and notify your fire insurance company. Additionally, consult a certified installer about the need for a flue liner in your masonry chimney. This liner can help maintain proper draft and prevent icing, which can block your chimney. Use the manufacturer's recommended flue diameter. An improperly sized flue won't provide the draft needed to operate the stove. Also, smoke may leak into your house through the air inlets without proper draft. Finally, make certain that all seals connecting the stove to the flue, and within the flue, are as tight as possible. Tight seals will prevent smoke from leaking into your house and contribute to good draft.

Build and maintain moderately hot fires quickly after loading the wood. A hot initial fire will help your catalyst light-off faster. However, once lit, the catalyst will stay lit even if the fire burns lower. Catalyst temperatures of 1,000°F or more are typical in normal operation. Once a catalyst "lights-off," it will stay lit at temperatures of about 500°F.

Burn moderate to full loads of wood that will provide several hours of uninterrupted burning and minimize door openings. By minimizing door openings, you allow the temperatures to stay high, which reduces pollution. Frequent door openings increase pollution both inside and outside your home.

Operate the stove's internal fans, if your stove has them, in strict accordance with the operating instructions. Some manufacturers recommend leaving the fans turned off for 30 minutes after start-up and refueling, and setting them on low for small fires. This is important because fans remove heat from the fire; cooler fires result in more pollution.

Don't burn trash, treated wood, particle board, plywood, or other fuels (such as coal, kerosene, or lighter fluid) unless they are listed on your stove's permanent label. Trash produces fly ash. Treated wood, particle board, and plywood contain chemicals that, when burned and inhaled, are hazardous. Burning other fuels may poison your catalyst or damage your stove. Cardboard, foil, and plastic may block exhaust flow through the catalyst, causing smoke to spill into your room.

Don't operate your stove in the catalyst bypass mode after the catalyst has reached the recommended temperature (350 to 600°F, or 177 to 316°C). At this point, your catalyst should be working for you (to produce more heat using less firewood) and for the environment (destroying smoke and the cancer-causing pollution in the smoke).

Don't open the ash pan while catalyst is engaged because this will lead to overheating.

Check the catalyst for crumbling, peeling, or other signs of physical damage and for buildup of ash or creosote that can plug up the catalyst. Buildup can be burned off by building a hot fire and partially engaging the catalyst (i.e., open catalyst bypass halfway, if possible). When the catalyst is cool, brush with a soft brush or vacuum the catalyst face carefully. Replace the catalyst if necessary.

Replace the catalyst if it's damaged, if large parts are missing, or it's obvious that the catalyst had deteriorated (i.e., fails to light-off when it should). Follow your owner's manual for replacement instructions. Be sure there are no leaks around the catalyst gaskets. When a catalyst fails to operate because of either physical or chemical deterioration, you will lose the benefits of reduced pollution and improved efficiency. It's a violation of federal law to operate your stove if the catalyst is deactivated or removed.

Check for catalyst deterioration by either of these two methods: 1) observe the chimney, both before and after the catalyst has engaged, to determine if the catalyst has reduced the amount of smoke, or 2) inspect the inside of the chimney for creosote buildup. Although there will still be some pollution and creosote buildup from operating catalytic stoves properly, the rates of pollution and buildup should be much lower than in conventional stoves. If the sky provides a solid light background, you should be able to see a difference between the pollution from a stove before and after the catalyst is engaged.

Remove the catalyst at least every two years and soak it in diluted (50/50) vinegar for 30 minutes (to dissolve the residual impurities that aren't removed by dusting and other routine maintenance), followed by two 15-minute rinses in boiling water (unless specified otherwise by the manufacturer). Replace the gasket after this cleaning operation. Check with you catalyst manufacturer for more details.

Check all gasket material, the bypass damper, and on cast iron stoves, the seams, once a year; replace frayed or worn material. Re-cement the seams as necessary. Check the catalyst gaskets and the gasket that seals the bypass mechanism (if your stove has one). Hint: One way to test the tightness of a gasket seal is to close the door on a dollar bill. Pull gently on the dollar bill. If it pulls easily out of place, the seal isn't tight and the gasket should be replaced. Repeat this test in several locations to check the seal all around the door. Gaskets in good condition will provide an airtight seal. A poor seal around a catalyst bypass allows smoke to pass through unburned, thereby increasing pollution. Like gaskets, the bypass damper and seams are areas where leaks can develop.

Check the wood-loading door and the ash drawer for tightness. These two areas are subject to warp or worn gaskets. Poor fit may result in over-heating or may allow smoke to escape into the room.

Make sure the thermostat (if your stove is equipped with one) is working properly; replace as necessary. Refer to parts list in your owner's manual. A broken thermostat can prevent air inlets and dampers from opening and closing properly.

Check the flue twice a month and have it cleaned at least once a year. After cleaning, check the seals and retighten joints in the flue and to the stove. Buildup of creosote on the flue walls can re-ignite and cause fires. Tight seals and joints prevent leaks.

Don't remove or tamper with the preset operating or temperature controls because it's against the law, it will void your stove's warranty, and it will create a safety hazard. The stove will be less efficient and more expensive to operate. Thermostats control either primary or secondary air, or both. Tampering may ruin the precisely designed secondary combustion capabilities, resulting in lower efficiencies, higher operating costs, and greater pollution.

Don't abuse your catalyst. Don't drop or scrape the catalyst, remove the metal band (if your model has one), or use high-pressure air to clean. Don't clean the catalyst with water when it is hot and in the stove. Catalysts can be damaged, thereby reducing their effectiveness.