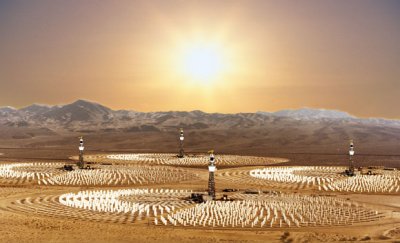 Artist concept of what would be the world's largest solar power plant in Victoria, Australia. It is scheduled for completion in 2013.

A central receiver solar power plant, also known as a power tower, a solar power facility that uses a field of two-axis tracking mirrors known as heliostats. Each heliostat is individually positioned by a computer control system to reflect the sun's rays to a tower-mounted thermal receiver. The effect of many heliostats reflecting to a common point creates the combined energy of thousands of suns, which produces high-temperature thermal energy. In the receiver, molten nitrate salts absorb the heat energy. The hot salt is then used to boil water to steam, which is sent to a conventional steam turbine-generator to produce electricity.