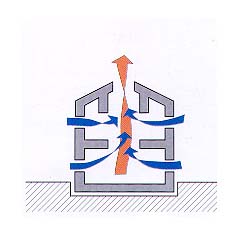 The chimney effect, also known as the stack effect, is the tendency of heated air or gas to rise in a duct or other vertical passage, as in a chimney, small enclosure, or building, due to its lower density compared to the surrounding air or gas.

The presence a chimney enhances the effect for several reasons:

how to fix a smoking stove or fireplace