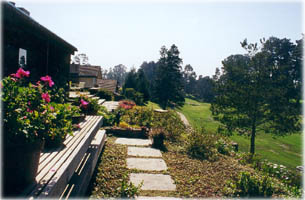 Solar access is the availability of (or access to) unobstructed, direct sunlight. Your access to sunlight becomes important if you use solar energy for space heating (and cooling), water heating, electricity, and/or daylighting.

Solar access issues emerged in the United States initially as a means by which landowners could attempt to protect their "access," or use, of solar radiation from present or future impairment. For example, a laundry with solar water heater collectors on its roof could legally alter any nearby structural development that could cast a shadow on the collectors and negatively affect system performance.

Several communities in the United States have developed solar access planning guidelines and/or ordinances. Data gathering, policy determination and development, and integrating new and/or existing statutes with solar access are necessary steps in the process. Zoning is a common mechanism used to protect solar access.

With optimum orientation, it is much easier to design buildings to incorporate solar features, such as passive space heating and cooling and daylighting. Many solar design strategies are highly cost-effective when incorporated into the initial building design. This typically reduces costs for initial capital investment in the building heating and cooling equipment, and ongoing operating costs.

Solar access protection is clearly advantageous for the following systems in the associated locations:

A number of communities throughout the country have created solar access policies and regulations according to unique local situations. If a community wishes to develop a plan for protecting solar access, they must take a number of steps to achieve its goal.

If there are no local solar access laws, private citizens requiring access to sunlight may have to bear the cost of private solar access agreements through such devices as easements or restrictive covenants.

Zoning ordinances and building codes can create problems for solar access. Most pertain to the following: