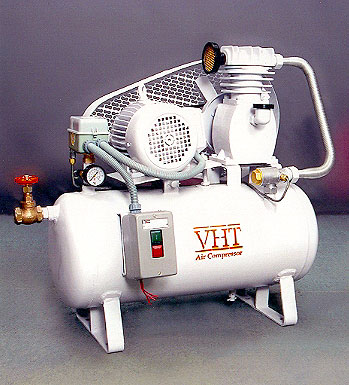 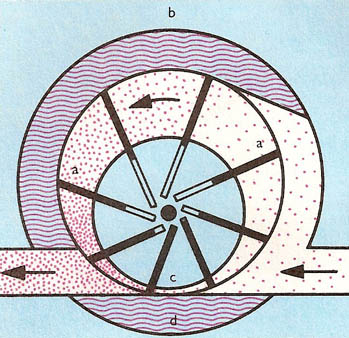 A rotary compressor in which the pressure of a gas is increased by trapping it between vanes which reduce it in volume as the impeller rotates around an axis eccentric to the casing: (a) diffuser; (b) casing; (c) impeller; (d) water coolant.

A compressor is a device used to compress air, or some other gas or vapor, for mechanical or electrical power production, and in air conditioners, heat pumps, and refrigerators to pressurize the refrigerant thus enabling it to flow through the system. Compressors are closely related to pumps: both increase the pressure on a fluid and both can transport the fluid through a pipe. As gases are compressible, the compressor also reduces the volume of a gas, whereas the main result of a pump raising the pressure of a liquid is to allow the liquid to be transported elsewhere. Compressing a gas naturally increases its temperature.

Reciprocating compressors have a cylinder in which runs a piston driven by a crankshaft; their principle of operation is similar to that of a pump. Simple rotary compressors have a rotating cylinder mounted eccentrically in a cylindrical casing. Vanes are mounted on the cylinder such that they slide in and out of slots as compelled by the walls of the chamber. Gas is introduced at one side of the chamber and drawn round by the vanes; the volume between cylinder and chamber decreases as the cylinder turns, and thus pressurized gas is released at the outlet on the other side of the chamber.