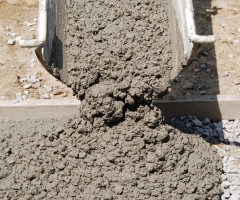 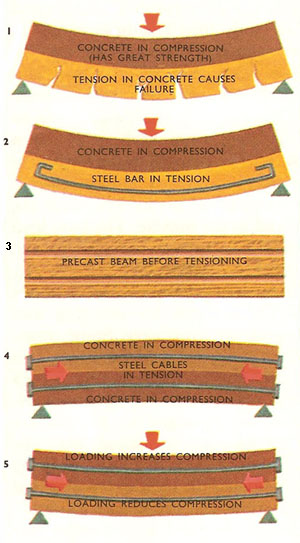 1. A beam of ordinary concrete subjected to a bending load. 2. By embedding a reinforcing bar into the beam, its lower edge has strength in tension. 3. A precast concrete beam before the cables have been threaded through the ducts. 4. By putting the cables in tension, the length of the beam has been reduced, and compressive forces have been established in it. 5. When subjected to a bending load, the compressive force in the lower edge of the prestressed beam is reduced.

Concrete is a versatile structural building material, made by mixing cement, aggregate, and water. Initially moldable, the cement hardens through a series of complex chemical reactions, forming a matrix which binds the aggregate. Various other ingredients – admixtures – may be added to improve the properties of the concrete; air-entraining agents increase durability. Since concrete is much more able to resist compressive rather than tensile stress, it is often reinforced with steel bars embedded in it which are able to bear the tension.

Prestressed concrete is reinforced concrete in which the steel is under tension and the concrete is compressed; it can with stand very much greater stresses.

Concrete is used for all building elements and for bridges, dams, canals, highways, etc., often as precast units.

Although natural cements were used by the Romans, the art of making concrete with natural cement was forgotten for many centuries until John Smeaton used it in building the Eddystone lighthouse (1756). In the 1820s John Aspdin patented a method of making cement by fusing lime and clay. Some of the early concrete structures were clumsy because of their bulk, but improvements in design and the introduction of new techniques gradually made possible the erection of many slender bridges and elegant buildings.

As a building material concrete has much to commend it. In comparison with many other materials concrete is quite cheap, and can be molded to any required shape easily. Another great advantage is that concrete has greater durability than the majority of other building materials. For instance, it very effective at withstand fire.

In industrial areas concrete stands up well to the effects of wind, rain, and also sulfur dioxide, which is a problem with many other materials. Also, once it has hardened, concrete requires no painting or other maintenance.

Many of the older concrete structures were condemned architecturally because of the lack of surface finish. At first, the only way of overcoming these criticism was to erect the skeleton of the structure in concrete, and to cover this framework with the more attractive but conventional building materials such as brick or stone. But later developments showed how to make concrete more attractive and interesting in appearance.

Concrete may be colored by the used of colored cement. Other attractive finished are obtained by using suitable crushed stone in the mixes.


How concrete is made

The four essential components of concrete are cement, water, sand, and stones, which are mixed in carefully controlled quantities. The cement and water react to give cement paste which coats the sand and stone and binds them together in a mass.

In the order that the concrete turns out as strong as possible, every effort must be made to exclude air pockets. One of the functions of the sand (or fine aggregate as it is called) is to fill the gaps between the stones (or coarse aggregate).

As the stones and sand are held together in the one mass by the cement paste adhering to the surface of these inert materials, it is essential that they are clean. In particular, there should be no clay on the surface of the stones. It is this for this reason that sand and stones need to be washed before going into the concrete mixer. This must be done by the suppliers at the pit or quarry.

The bonding of the stones and sand results from a chemical reactions between the cement and the water. Although only small quantities of water are required for this purpose, slightly more water is needed to make the concrete sufficiently plastic for it to be completely compacted, i.e., without residual air pockets. The use of too much water reduces the strength of the concrete, so that ideally the water content should be the minimum necessary to provide complete consolidation.

Householders wishing to lay concrete paths or do similar odd jobs often buy sand and stones already mixed. This may be dangerous as these mixes, described as "all-in" ballast, are liable to contain too much of the fine aggregate. Since some of the spaces (voids) between the large particles are already occupied by sand a mix of one part cement to 5 parts combined sand and stones is equivalent to a mix of 1 : 2 : 4.

The amount of water required depends largely on the use to be made of the concrete.

Concrete, provided it is correctly mixed and placed, has great mechanical strength and durability. The strength is derived mainly from the bonding of particle to particle by the hardened cement paste and may be tested by compressing sample cubes. As a result of adding water to the cement, new chemical compounds are created. These reactions start immediately the water is added to the mix and continue for days, weeks, or even years after the concrete is laid.

Although concrete appears to be completely hard after perhaps 8 hours, in fact hardening continues over a much longer period. The formwork around the concrete may, therefore, have to be left in place for two or three days until the concrete is strong enough to support its own weight independently.

Concrete has considerable strength, but it is restricted to strength in compression (when it is squeezed). It has very little strength if it is stretched, i.e., is in tension. This can be seen quite easily if a concrete beam supported at its ends is loaded at its mid-point. After a while cracks start to form in the underside of the beam, but there is none in the top. The top is in compression, while the lower edge is in tension.

By replacing the steel with a compressive force the whole concrete section is brought into play. In this way, smaller sections, longer spans, and thinner columns become possible and make concrete more attractive to architects. The compressive force, or prestress, is applied by means of a high strength steel tendon.

Ordinary concrete is poor at withstanding bending forces, yet such forces occur in almost every part of a structure except in the case of massive piers and foundations. In a bridge, for instance, the weight of the structure itself sets up bending forces. To this dead load, which is constant, must be added the live load, which varies according to the weight and the position of the traffic on the bridge.

Since ordinary concrete is not in itself suitable, steel reinforcing bars, which have a high strength under tension, are embedded in the concrete to take up the tension forces while the concrete itself resists the compressive forces. Various methods are used to ensure that the tension forces are transmitted from the concrete to the steel and that the two materials act together. Often the slightly rough surface scale on the steel produced by corrosion is enough to provide a "key," but for greater strength bars are often given a special surface or deformed to give a greater interaction between the two materials.

Reinforcing was introduced in France a century and a half ago, and today there are many outstanding examples of architecture and engineering in reinforced concrete. Many of the finest examples, however, have only been made possible by the development of prestressed concrete.

One of the biggest disadvantages of ordinary reinforced concrete is its great weight and bulk. The concrete in the part of a beam subject to tension, for instance, serves mostly to enclose the reinforcing bars and does little structural work itself. This is particularly wasteful when the span of beams and floor slabs becomes longer. The weight of the beam could be so great that most of the strength in the structure is used just in supporting itself.

In prestressed concrete, strong steel bars or cables are used in addition to the ordinary reinforcing bars. These prestressing tendons are put under high tension, and when released the entire concrete element is subjected to compression forces, and bending forces that act in a direction opposite to the dead load. The forces set up by the prestressing tendons tend to push the center of the beam or slab upward against its own weight. The bending forces in service are mostly those resulting from the live load, and when a live load is applied all it does is to relieve some of the compression forces. The original compression is always arranged to be greater than the tension the largest load is likely to produce. In this way the element should never be in tension.

By using prestressed concrete, slender and attractive beams and slabs can be made to carry much greater loads. The attractive appearance of concrete bridges is possibly only with prestressing. By reducing the amount of concrete needed, prestressing helps to reduce costs, and because the finished structure is so much lighter the foundations do not need to be so massive.

In the construction of some large concrete structures, the concrete is placed around the reinforcement in forms in the actual place where it will finally rest. This method of working is known as in situ construction. However, in many other cases individual components such as beams, columns, and floor and facing slabs are precast.

By casting the parts away from their final positions and then moving them into place, the quality of the workmanship can be much more carefully controlled. If many identical pieces are required, the large number of units makes it economical for the manufacturer to invest in high-quality forms and molds that produce a better finished result. Another advantage, of course, is that the work can on regardless of the weather; components can also be made and stored for use when they are needed.

Precasting has been used for many years in the making of small standard concrete items, but today components weighing many tons are cast off the site, where quality can be controlled. Whole tunnel sections, some weighing thousands of tons, are built in dry-docks and floated into place for road and railway tunnels under rivers and harbors. Usually, however, the weights of segments are limited so that the precast units can be easily transported and can be handled by standard cranes on the site.

More than anything else, precasting has made possible the development of various systems of industrialized building in which precast units as large as whole wall sections (or even complete rooms)) are built under factory conditions and assembled on the site in much the same way as a miniature construction kit.