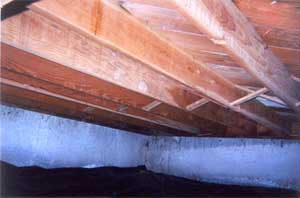 If you properly insulate your crawl space, in addition to air sealing and controlling moisture, you will save on energy costs and increase your home's comfort. How to insulate a crawl space depends on whether its ventilated or unventilated. Traditionally, crawl spaces have been vented to prevent problems with moisture; most building codes require vents to aid in removing moisture from the crawl space. However, many building professionals now recognize that building an unventilated crawl space (or closing vents after the crawl space dries out following construction) is the best option in homes using proper moisture control and exterior drainage techniques. There are two main reasons for this line of thinking:

If you have or will have an unventilated crawl space, then your best approach is to seal and insulate the foundation walls rather than the subfloor. The advantages of insulating the crawl space are as follows:


The disadvantages of insulating a crawl space include the following:

Review plans for this method of foundation insulation with pest control and local building officials to ensure code compliance.


For insulating truss floor systems, it's better to install netting or foam board insulation to the underside of the floor trusses. Then, fill the space created between the netting or insulation and subfloor with loose-fill insulation.

Here are some guidelines to follow for insulating a ventilated crawl space:

As mentioned above, when properly insulating a crawl space, you also have to consider moisture control measures and air sealing. A crawl space vapor barrier or retarder applied in existing vented crawl spaces will control moisture and protect the insulation and floor joists.

Finally, you need to consider radon resistance or control when installing any type of foundation.