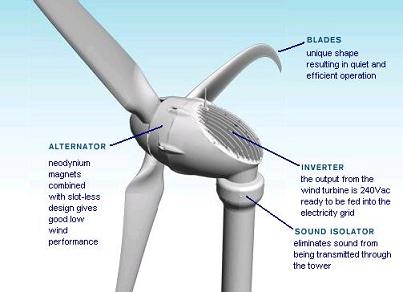 With a rated capacity of 1.8 kW, Skystream can provide anywhere from 40% to 100% of a household or small business' total energy needs. Its sleek, distinctive swept-wing blades and elegant form make Skystream an attractive addition to any home. 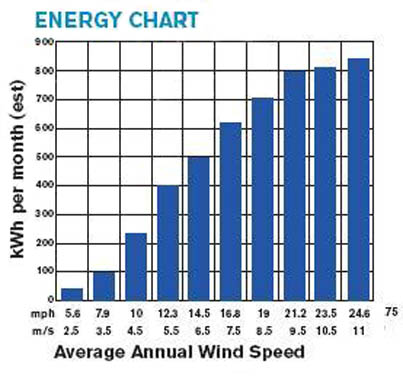 Until recently, I was like many people who dream of one day installing a small wind turbine to supply much or all of their domestic energy needs. I even dreamed of selling the extra energy produced by my wind turbine and/or solar panels to the grid.

In today's world, more and more people are looking at small-scale wind turbines as a way possibly to save money on energy bills. Perhaps you're going through the process of installing a wind turbine at your home? Or, maybe you've already set up such a system and are keen to see the results.

No matter if you are just having first thoughts about installing a domestic wind turbine, or looking around for the the best wind turbine choice, this article will help with your decision-making. More importantly, it will encourage you to think long and hard before investing in a device that may fall well short of your expectations.

It's common to talk about wind turbines in terms of how many kilowatts of power they can generate. But this approach can be misleading.

The only wind turbine manufacturer I know that is honest enough to sell their turbines based on the average wind speed in the area of installation, also taking into account the kWh/year you consume at your place is the company for which I work. This company, Winside, does not sell turbines for the domestic market because it does not believe they perform economically on this scale.

I have learned so much about what is right and wrong in this business that I cannot just sit back and watch people being constantly deceived by the majority of wind turbine manufacturers who do not paint an accurate picture, or reveal the true facts about small-scale wind power, to their customers.

Before get into the details of domestic wind-power economics, we need to go over some basic information and look at some of the most common used terms and why they are so important.

The first essential point to cover is the difference between kW and kWh/year or month.

The kilowatt is a unit of power equal to one thousand watts.

Most wind turbine manufacturers advertise their products in terms of kilowatts. They may talk, for example, about a 5 kW wind turbine.

What manufacturers really mean when they quote such figures is that their generator is able to produce the specified amount of kW in an optimal situation, which typically involves completely unrealistic weather conditions. The power generated under optimal conditions is called the nominal or rated power.

Typically, when a manufacturer talks about its product being a 5 kW wind turbine, it means the turbine will generate 5 kW when the average wind speed is about 15 m/s (33 mph).

When a manufacturer talks about a 5 kW wind turbine, what you can expect is a very small fraction of this power output in practice – less than 7% of 5 kW (0.35 kW) even in a windy location where the average wind speed is 4.5 m/s (10 mph).

A kilowatt-hour is the unit employed by power companies for the purposes of billing the end-user. It is the amount of power consumed in running a 1 kilowatt appliance running for 1 hour. For example, if you leave a light bulb of 100 watts on for 1 hour, you will used 0.1 kWh (100 watt-hours).

The most accurate and meaningful way to gauge the effectiveness of a wind turbine is to look at how many kilowatt-hour (kWh) per year it will generate with an average wind speed of 4.5 m/s (10 mph) or less. This is the only way you will really have a feel for the return on investment you will get when purchasing and installing a wind turbine. But you will have to read between the lines of most manufacturer's data to extract this information.

As indicated above, the wind turbine nominal (or rated) power has little bearing on the actual power production you will get.

Wind speed is measured by a device called anemometer.

The average wind speed is the wind speed measured over a given period of time and is calculated from the average of all the data collected within this period.

The high wind speed is important because you must make sure your wind turbine will be strong enough to withstand the maximum wind force it is likely to experience. If you don't consider this fact, when the first strong winds come along you might end up with a broken wind turbine that in the best of cases you will have to spend more money to repair. In the worst case scenario, you may end up with damage to surrounding property and injuries to people.

The fact is that nobody can predict the wind. It can blow from any direction and with a range of intensity from dead calm to severe gale. Not only is it unpredictable on a daily basis, but even from year to year. Consequently, any wind turbine manufacturer that promises or assures you that its product will generate a certain amount of kW/year is not to be trusted and you should avoid doing business with it.


4. The importance of swept area

Swept area is the area in square meters (or square feet) in which the wind turbine is able to take advantage of the blowing wind and transform it into useful power.

When you multiply the height in meters of the blades of a given wind turbine to its diameter in meters, you will have the swept area in square meters. The same is true if the height and diameter is in feet.

The bigger the swept area of a wind turbine, the more power it will produce.

One of the best horizontal wind turbines in the market is Skystream (see illustration at upper right). The most salient facts, supplied by the manufacturer, which we need to consider, are are summarized in the box below.

Let's now look at how to interpret the data provided.

In the technical specifications you will see that the swept area is 10.87 square meters. This is quite large for domestic wind turbine. Such a big device can't be installed on your roof. Instead, it must have its own mast that stands away from the house.

From the energy chart provided by the manufacturer, it turns out that you would need an average wind speed of 11 m/s (24.6 mph) in order to achieve about 800 kWh/month.

As explained above, a realistic average wind speed, even in windy places near the coast, is not much more than about 4.5 m/s (10 mph). According to the energy chart, such an average speed equates to little more than 200 kWh/month power production, which is 4 to 5 times less than the average of 900 kWh/month that a typical home requires if it is to be independent of the grid.

To put it another way, you would need at least 4 Skystream units, and preferably 5 units, to completely power your home.

A Skystream 3.7 turbine costs around 18,000 USD, plus shipping and installation. Five units would cost 90,000 USD, plus shipping and installation, to power your home, assuming you live in a wind location. Even with government incentives of 40%, such as those offered in the United States, the total cost of five units would still be about 55,000 USD.

If you wanted not only to power your entire home but sell some excess power to the grid, you would obviously need more than 5 Skystream units. You would also need to invest in what is called a power grid system (for more on this see section 6.2. below).


6. The fallacy of being able to produce so much power from small domestic wind turbine that the excess could be sold to the grid

Small wind turbines that might be used domestically, even with inverters, can only supply your own home with power unless they are attached to additional equipment. Even if you operate a number of wind turbines plus solar panels that produce enough power that you have excess to be able to sell to the grid you need a device called power grid system in order to connect your generators to the grid.

An inverter or inverter/charger is a device that converts direct current (DC) to alternating current (AC) to power a variety of equipment, including power tools, computers, appliances, pumps, audio/video equipment and more. Inverters and inverter/chargers utilize a battery bank to supply power to connected equipment.

Note that, on its own, an inverter is only be used to supply AC power to appliances within your own home: it cannot send power to the grid with a power grid system (see below).

Also, be aware than an inverter is itself very power-hungry and will consume a significant fraction of the electric power generated by a domestic wind turbine. This should be factored into your calculations and so it is very important to get accurate data on the power consumption of the various inverters used by different wind turbine manufacturers.

A power grid system (PGS) is a large device, about the size of a regular door, that is capable of taking surplus power from wind turbines and/or solar panels and outputting it to the grid. It is the only means by which you could sell any excess power to the grid. Only a few manufacturers in the world make PGS's and they typically cost 26,000 to 32,000 USD (about 20,000 to 25,000 euros).

It's safe to conclude that it's unrealistic to suppose many home owners would be willing to invest in a reasonable sized wind turbine or array of turbines plus a PGS (power grid system) so that they could supply all their own needs and have enough power left over to feed it into the grid. The minimum cost of such a set-up would be 80,000 USD.


7. The domestic market is an easy target for manufacturers

Knowing all the above facts, raises the big question: Why do most wind turbine manufacturers market their turbines in terms of kW nominal rated power if in reality their products are incapable of producing anywhere near that amount?

The more I have learned about the wind power industry, the more I realize that the only thing that matters for most manufacturers is to sell as many wind turbines to home owners as possible.

Manufacturers, in general, are not being honest with their customers about what they can realistically expect from domestic wind turbines. And the majority of consumers don't know what is important to consider when purchasing such devices. This is why the domestic market is such an easy target.

Is up to you, the consumer, to get informed and never make a choice before exploring all the options. In further articles I will be comparing small wind turbines and giving you the knowledge to be able to make your own comparisons.