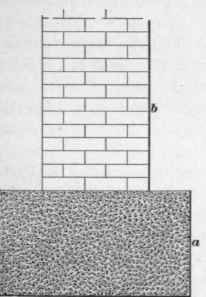 A brick wall b, on a concrete footing a.

Footing is a foundation structure used to distribute wall or column loads to the bearing soil or to the piling. There are two general classifications of column footings. The isolated spread footing supports one column, and the combined footing support two.

Footings must be spread wider than the base of a column or wall for a number of reasons. They must give stability by reducing the unit pressure below that at which there might be local settlement along one side of the foundation. They must be thick enough to resist the punching shear of the column, and they must not flare so rapidly as to cause them to be weak in bending. Footing for walls, columns, etc., may be conveniently and economically made of reinforced concrete. Except for very heavy loads, the footing slab is usually square or rectangular and of constant thickness. Design is usually made by semirational rules and formulae since the distribution of stress in such a structural is very complex. For very heavy column loads the footing is usually made in the form of a truncated pyramid or preferably in a series of steps giving the "stepped footing." The latter type predominates due to the ease with which forms may be constructed. In case the soil is so weak as to require an extremely wide footing, a steel I-beam grillage is incorporated in the footing.