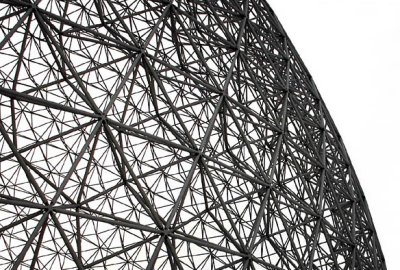 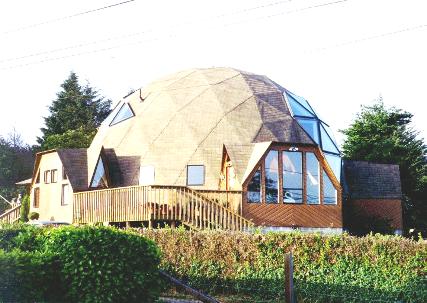 A geodesic dome is a roughly hemispherical structure built from of a self-bracing network of triangles. This design, conceived by the American architect R. Buckminster Fuller, gives impressive structural strength while using a minimum of material. Geodesic domes are efficient, inexpensive, and durable. However, homes based on this design must overcome a number of difficulties.

The shape of a dome house makes it difficult to conform to code requirements for placement of sewer vents and chimneys. Off the shelf, all building materials come in rectangular shapes. Fire escapes are problematic; codes require them, and they are expensive. Windows conforming to code can cost anywhere from five to fifteen times as much as windows in conventional houses. Scrap from cutting (i.e., waste) can run to a high proportion, driving costs up. Professional electrical wiring costs more because of increased labor time; but even owner-wired situations are costly, because more of certain materials is required with a dome versus conventional construction.

Domes have unique interior air-stratification and air-moisture-distribution characteristics. These tend to result in a lack of longevity if wood framing or interior paneling (in the upper portions) has been used, as is often the case with a residential dome. Privacy is compromised in a dome since a dome is difficult to partition satisfactorily, also since sounds circulate (ambience problems are mentioned below). The dome shape leaves the vast majority of the interior surface unusable because of the sharply sloping roof lines. For example, in a 20 foot tall dome, only the bottom 8 feet or so are really usable. This leaves a large volume that must be heated, yet cannot be lived in.

Dome builders find it hard to seal domes against rain. The most effective method with a wooden dome is to shingle the dome. Another method is to use a one-piece reinforced concrete or plastic dome. Some domes have been constructed from plastic or waxed cardboard triangles that overlapped in such a way as to shed water. Domes tend to develop leaks because the sun heats the dome during the daily cycle and the stresses are conveyed through the structure as the sun moves through the sky much as one might break the shell of a hard-boiled egg by simultaneously pressing and rolling.

Sounds, smells and even reflected light tend to be conveyed through the entire structure. Lloyd Kahn, author of Domebook One, Domebook 2 and later, Shelter, became disillusioned with domes by 1973, and details many more problems with dome homes on his website calling them smart but not wise. Kahn is the source of many of the criticisms listed above.

Finally, the furnishing and fitting world is designed with flat surfaces in mind, and installing something as simple as a sofa results in a half-moon behind the sofa being wasted.