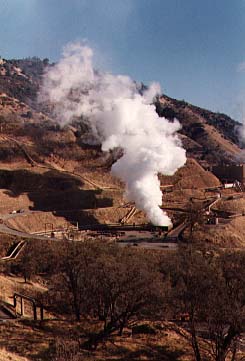 The eruption of volcanoes is graphic evidence of the energy stored inside the Earth. Once thought to be left over from when our planet was molten, geothermal energy is now known to be produced continuously by the slow decay of radioactive elements deep inside the Earth's core.

Geothermal energy can be tapped in a variety of ways as a clean source of energy for homes and industry. The commonest way of capturing the energy from geothermal sources is to tap into naturally occurring hydrothermal convection systems where cooler water seeps into the Earth's crust, is heated, and then rises to the surface. When heated water is forced to the surface, it is straightforward to capture that steam and use it to drive generators. Geothermal power plants exploit steam or hot water that emerges from drilled holes.

There are three designs for geothermal power plants, all of which pull hot water and steam from the ground, use it, and then return it as warm water to prolong the life of the heat source. In the simplest design, the steam goes directly through the turbine, then into a condenser where the steam is condensed into water. In a second approach, very hot water is depressurized or "flashed" into steam which can then be used to drive the turbine.

In the third approach, called a binary system, the hot water is passed through a heat exchanger, where it heats a second liquid – such as isobutane – in a closed loop. The isobutane boils at a lower temperature than water, so it is more easily converted into steam to run the turbine.

The choice of which design to use is determined by the resource. If the water comes out of the well as steam, it can be used directly, as in the first design. If it is hot water of a high enough temperature, a flash system can be used, otherwise it must go through a heat exchanger. Since there are more hot water resources than pure steam or high-temperature water sources, there is more growth potential in the heat exchanger design.


Direct use of geothermal heat

Geothermal springs can also be used directly for heating purposes. Hot spring water is used to heat greenhouses, to dry out fish and de-ice roads, for improving oil recovery, and to heat fish farms and spas. In Klamath Falls, Oregon, and Boise, Idaho, geothermal water has been used to heat homes and buildings for more than a century. New housing developments in Reno, Nevada, are also using geothermal heat from a well for home heating.

In Iceland, virtually every building in the country is heated with hot spring water. In fact, Iceland gets more than 50 percent of its energy from geothermal sources. In Reykjavik, for example (population 115,000), hot water is piped in from 25 kilometers away, and residents use it for heating and for hot tap water.

Geothermal heat occurs everywhere under the surface of the earth, but the conditions that make water circulate to the surface are found only in less than 10 percent of Earth's land area. An approach to capturing the heat in dry areas is known as hot dry rock. The rocks are first broken up by pumping high-pressure water through them. Water is then pumped from the surface down through the broken hot rocks. After the water heats up, it is brought back to the surface through a second well and used to drive turbines for electricity or to provide heat.

A much more conventional way to tap geothermal energy is by using geothermal heat pumps to provide heat and cooling to buildings. Also called ground-source heat pumps, they take advantage of the constant year-round temperature of about 50°F that is just 5 to 10 feet underground. Either air or an antifreeze liquid is pumped through pipes that are buried underground, and recirculated into the building. In the summer, the liquid moves heat from the building into the ground. In the winter, it does the opposite, providing pre-warmed air and water to the heating system of the building.


Geothermal electricity today and in the future

About 8,000 megawatts (MW) of geothermal electricity are currently produced around the world, including about 2,800 MW of capacity in the United States. Today's technology produces electricity mostly from hydrothermal (hot water/steam) resources. In the future, we may be able to use more of the heat of the deep, hot, dry rock formations of Earth's crust, and possibly the even deeper, almost unlimited energy in Earth's magma.