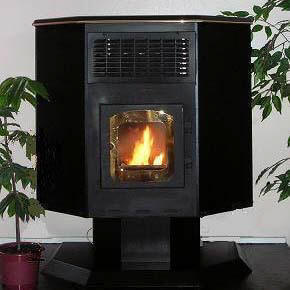 A grain-burning stove is a stove similar to an ordinary wood stove in appearance that is specifically designed to burn grain. Grain is a good, renewable fuel, but requires special conditions to burn effectively. It is also very cheap in "breadbasket" regions of the world, including Canada and the American Midwest, where the grain doesn't have to be transported far. Therefore, many customers for this type of stove are rural folk, especially farmers, who live in these regions. Note that grain-burning stoves do not have to burn "food as fuel." They are most effective, both environmentally and economically, when using unmarketable or grain, which would otherwise be wasted.

Typically, a grain-burning stove can use all grades of hulled wheat, rye, triticale, peas, fava beans, and corn, as well as other biomass fuels, such as cherry pits and wood pellets. It's recommended that the grain be cleaned before use. Oil seeds and grains with high hull content such as barley and oats don't work well in the stoves.

As in the case of all heating appliances that use biomass fuel, if you don't have your own supply check on the availability and cost of grain in your area. When deciding which particular stove to buy, look carefully at the manufacturer's recommendations and the stove's features. Make sure that the stove is designed for burning grain and similar materials and of the grade you intend to burn.

Expect to burn up to one bushel per day, or about 150 bushels in total in the heating season (one bushel of wheat weighs about 27 kg or 60 lb.). This figure will obviously vary depending on the size of the home and the type and quality of grain being burned.


Grain as a fuel

Compared with wood pellets, grain is denser, has a much higher water content, and comes in a greater variety of types. It is for these reasons that a grain-burning stove, although generally similar in the way it works to a pellet stove, must be purpose-made, with controls and mechanisms that enable different kinds of grain to burn efficiently. With some adjustments, a grain-burning stove can also be used to burn pellets, but the reverse is not true.

Grain begins to burn at a temperature of about 1100°F (593°C) but before this can happen all the moisture must be driven out, a process that takes place at the boiling point of water – 212°F, or 100°C. Grain containing more than about 14% moisture won't generally burn unless it's mixed with drier or more easily combustible grains.

An important aspect of a grain-burning stove is how effectively, once the grain is burning it burns through completely. Some means is needed to make sure that unburned and still moist grain is able to catch fire. Typically, this involves some mechanism for agitating the fuel, such a stirring stick, or by having a burning pot that allows air to reach the grain through appropriate sized holes.


Cost comparison of burning grain and other fuels (Jan 2006 rates)