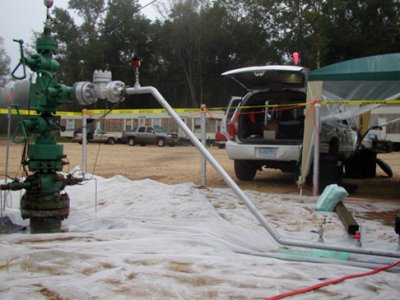 Perfluorocarbon tracers in a syringe pump located in the back of the NETL van are being added to carbon dioxide as it is injected underground at the Frio saline aquifer sequestration test site near Houston, Texas. Credit: National Energy technology laboratory.

A PFT (PerFluorocarbon Tracer gas) air infiltration measurement is one of several methods that can be used to determine the air tightness of a building. The PFT technique and blower door test both provide information about air leakage and energy loss.

A blower door test locates air infiltration by exaggerating the defects in the building shell. However, this type of test only measures air infiltration at the time of the test. It does not take into account changes in atmospheric pressure, weather, wind velocity, or any activities of the occupants that may affect air-infiltration rates over a period of time.

The Brookhaven National Laboratory developed the PFT technique to measure changes over time (a few hours to several months) when determining a building's air-infiltration rate. While this test cannot locate exact points of infiltration, it does reveal long-term infiltration problems.

The emitters and receivers are located according to written instructions provided by Brookhaven. The person performing the ventilation measurement begins by uncapping the receiver. Because the rate at which the emitter releases gas is temperature sensitive, the user needs to provide an average temperature estimate during the procedure for the test to be most accurate. At the end of the test period, the receiver is recapped and sent, along with the temperature readings and room volumes, to the Tracer Technology Center at Brookhaven National Laboratory for analysis, where an expert must analyze the results. The Tracer Technology Center sends the customer a computerized test report that includes the average air infiltration rate.

Emitters are available with six different perfluorocarbon gases, making it possible to conduct simultaneous tests in six different areas or zones of a building. Every zone measured requires one receiver. Zones may be physically distinct areas, such as the basement, first and second floors of a house, or distinct heating zones in a zone-heated building. Using more than one gas makes it possible to determine not only the air infiltration rate for each zone but also the airflow pattern between zones, such as between the basement and the first floor. Determining airflow patterns between zones makes it possible to determine air leakage into and out of each zone.

The PFT technique can also determine the infiltration rates of other gases, such as radon. This is done by placing different emitters in the soil next to the foundation, below the basement floor, and in the house. Calculating the rate of infiltration may help detect a potential radon hazard if you live in an area with large radon concentrations.

In addition, the PFT technique can be used to quantify pollutant source strengths in multizone buildings if the user provides pollutant concentration data in each zone taken at the same time as the PFT measurement. In this way, the user will know which location contains the pollutant source even though pollutant is present in all zones.