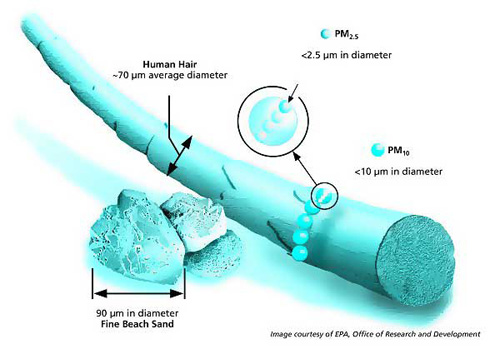 Particulates, also known as particulate matter, is a type of air pollutant consisting of a complex mixture of extremely small particles and liquid droplets. Particle pollution is made up of a number of components, including acids (such as nitrates and sulfates), organic chemicals, metals, and soil or dust particles.

The size of particles is directly linked to their potential for causing health problems. The most danger is presented by particles that are 10 micrometers in diameter or smaller because those are the particles that generally pass through the throat and nose and enter the lungs. Once inhaled, these particles can affect the heart and lungs and cause serious health effects. The US Environmental Protection Agency groups particle pollution into two categories: