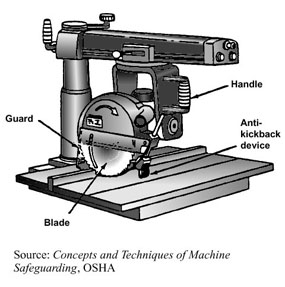 A radial arm saw is a power tool consisting of a rotating blade and motor, like a portable circular saw, which is suspended from a long, adjustable arm over a fixed cutting surface. The blade-motor assembly is connected to the arm by a yoke that allows multiple degrees of rotation. This enables the saw to be swung in a variety of directions. The motor assembly connects to the overhead arm by a carriage assembly that can travel the arm's length when manually pulled by the operator.

The radial arm saw can be used for cutting materials to length and for cutting mitered, beveled, and compound angles. Although it is first and foremost a woodworking machine, it can also be used to cut metals, such as angle iron or aluminum extrusions. Radial arm saws are capable of ripping and cross cutting as well as miter, dado, and rabbet cuts.

Before the radial arm saw was invented, the task of crosscutting lumber was often carried out by table saws and hand saws. Table saws can easily rip stock, but pushing a long piece of stock widthwise through a table saw blade is much harder. In contrast, when a radial arm saw is used for crosscutting, the workpiece remains stationary on the saw's table, and the blade is drawn through the wood. For ripping, the blade is fixed at a 90-degree angle parallel to the rear fence, and the stock is passed through the saw sideways, either right-to-left or left-to-right. This enables much greater lengths of stock to be cut.

For cutting angles, the saw is tilted to the desired angle using a protractor on the saw housing and held in place using the bevel lock. For mitering the saw is swivelled right or left. The blade can also be raised or lowered using a crank.

The size of a radial arm saw is determined by the diameter of its blade. Home improvement stores typically carry models that have 8-inch (20.3 centimeters) to 12-inch (30.5 centimeters) blades. The most popular size is 10 inches (25.4 centimeters), which will cut stock up to three inches thick. Larger models are usually found in industrial settings. Attachments available for radial arm saws include rotary planers and sanding and buffing wheels.

The radial arm saw can be less safe when used by an inexperienced or untrained operator, but is not dangerous when used properly. In the hands of an experienced operator, the radial arm saw can, for example, safely cut compound miters for picture and door frames, rip lumber precisely to width, and cut tongues and grooves. Most cuts are followed with a fit and require more material be removed, sometimes a tiny amount.

The versatility of a radial arm saw makes it an ideal tool for most home improvement projects such as trim, molding, and door casings. For doing crosscuts and miter cuts, some woodworkers prefer a compound miter saw. However, the radial arm saw is capable of a greater repertoire of cuts, including rip cuts and a variety of complex cuts.