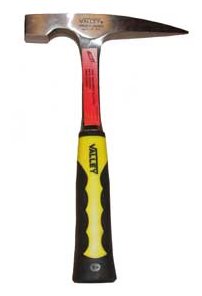 A rock pick is a hammer that is similar to a bricklayer's hammer except the peen (the part of the hammerhead opposite the flat striking surface) is ground to a point. Rock picks are used for cutting, setting, and laying stone. They, and the chisel-ended bricklayer's hammer, are also used by geologists. The pick style of rock hammer is usually associated with "hard rock" (igneous and metamorphic) geologists, even though the pointed pick is rarely used.