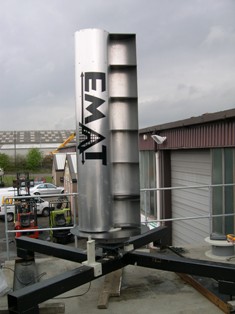 A low-cost Savonius turbine for domestic use developed by EMAT Ltd, of Gateshead, England.

It is useful for grinding grain, pumping water, and many other tasks, but its slow rotational speeds make it unsuitable for generating electricity on a large-scale. Small electricity-producing Savonius turbines for domestic use, however, such as the one shown here, have been developed.