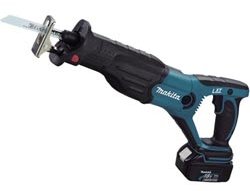 The powered sabre saw is typically a larger more powerful jigsaw and is usually referred to generically as a reciprocating saw. The main distinction between the saber/reciprocating saw and the jigsaw is that its overall appearance is somewhat reminiscent of a saber sword. Its use in the hands is more typically against vertically standing objects unlike the jigsaw which has its primary use for cutting horizontally across surfaces. The saber saw consists of a reciprocating cutting implement, usually a toothed blade, to chiefly cut through wood and other various materials. Due to its large blades (relative to the jigsaw) its primary use is to slice material handily, rather than using the traditional circular saw in the application of building homes. It is also a handy implement when cutting into tight crevices.

The unpowered saber saw consists of handle that grips an interchangeable blade. It is primarily used in metal working and the building industry in situations where the object to be cut cannot be hindered by the frame of the hand held implement holding the blade, e.g. in metal working the hacksaw's frame doesn't allow for cuts to be made close to the blade where a hindrance would otherwise touch the frame. There are many similarly designed cutting implements that have the traditional saber saw's qualities but are not referred to as saber saws, these include the keyhole saw, and some Japanese varieties of woodwoorking tools, e.g., the kataba saw.