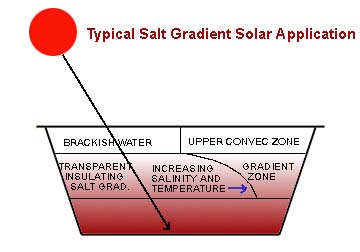 A salt gradient solar pond is a solar pond that consists of three main layers. The top layer is near ambient temperature and has a low salt content. The bottom layer is hot – typically 160–212°F (71–100°C) – and is very salty. The important gradient zone separates these two. The gradient zone acts as a transparent insulator, permitting sunlight to be trapped in the hot bottom layer (from which useful heat is withdrawn). This is because the salt gradient, which increases the brine density with depth, counteracts the buoyancy effect of the warmer water below (which would otherwise rise to the surface and lose its heat to the air). An organic Rankine cycle engine is used to convert the thermal energy to electricity.

Naturally occurring salt gradient solar lakes are found many in places on Earth. The phenomenon was first observed in Transylvania in the early 1900s. Natural salt gradient lakes form when fresh water flows onto salt brine and mixes to create a salinity gradient. Salt gradient solar applicationes include using the salinity gradient to protect fish from "cold kill" in aquaculture applications (see also solar hot water for aquaculture), to control crystallization in certain mining operations, and to attain higher temperatures for water desalination or electricity production.