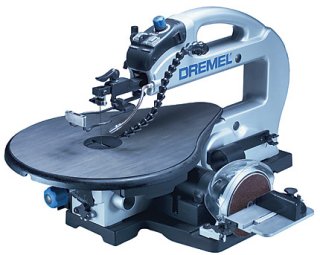 A scroll saw is a small electric- or pedal-powered saw used for freehand cutting intricate curves in relatively thin wood. A scroll saw is like a jig saw or a coping saw in some ways. Scroll saw blades, in particular, are like those of a coping saw and work by way of a reciprocating up and down motion.

There are different kinds of scroll saws. The most common design is the parallel arm variety in which a motor is attached near the back of the arms, and the two arms always remain parallel to each other. The C-arm saw has a solid "C" shape and a blade that is mounted between the two ends of the "C". The parallel link scroll saw has rods in the upper and lower arms that are pushed by the motor to move short – about 4 inches (100 millimeters) – articulated arms and the end which hold the blade. Modern scroll saws all maintain a constant tension in the blade.

Scroll saw blades are typically 5 inches long and come in various types. These include: