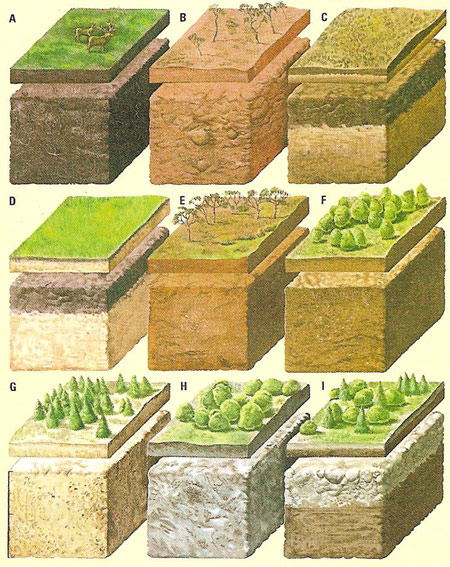 The composition and color of a soil identifies it to a pedologist. Tundra soil (A) has a dark, peaty surface. Light-colored, desert soil (B) is coarse and poor in organic matter. Chestnut-brown soil (C) and chernozem (D) – Russian for "black earth" – are humus-rich grassland soils typical of the steppes and the prairies of North America. The reddish, leached latosol (E) of tropical savannas as a very thin, but rich humus layer. Podzolic soils are typical of northern climates, where rainfall is heavy and evaporation is slow. They include the organically rich brown forest podzol (F), the gray-brown podzol (H), and the gray-stony podzol (I) that supports mixed growth of conifers and hardwoods. All are relatively acidic. The red-yellow podzol (G) of pine forests is quite highly leached.

The soil is the uppermost surface layer of the Earth, in which plants grow and on which, directly or indirectly, almost all life on Earth depends. Soil consists, in the upper layers, of organic material mixed with inorganic matter (see humus) resultant from weathering. Soil depth, where soil exists, may reach to many meters. Between the soil and the bedrock is a layer called the subsoil.

Mature soil may be described in terms of four soil horizons: (1) the uppermost layer, containing organic matter, though most of the soluble chemicals have been leached (washed out); (2) strongly leached and with little or no organic matter; (3) the subsoil, a layer of weathered and shattered rock; and (4) the bedrock.

A soil profile is a vertical view of the layers of soil from the surface down to the unaltered parent material, and is used in classifying soils.

Soils may also be classified in terms of texture (e.g., clay, silt, sand). Loams, with roughly equal proportions of sand, silt, and clay, together with humus, are among the richest agricultural soils.

Soil testing is the process of analyzing the chemical and mineral composition and porosity of soil. It is carried out for various reasons, including to determine the soil's ability to support plant life.