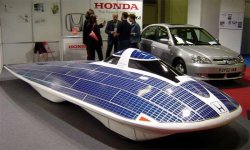 Typical experimental automobiles are the solar race cars, known from the "Solar World Challenge" car race held in Australia. Producing a peak output of 3.6 kilowatts (kW), the Icar sailplane from the University of Stuttgart in Germany is one with a large wingspan and plenty of surface area for solar cells, much like the flying wing design by NASA known as the Pathfinder, which produces 12.5 kWp. Solar-powered airships have also been experimented with. Toy-makers can manufacture solar-powered cars with a Kosmos building kit.

Solar-powered boats are regularly in operation on the waterways in Hamburg, on Lake Constance and in the Sydney harbor. They are built as catamarans and use the deck to place the solar cells. The elegantly designed Solarshuttle on Lake Constance has an output of 4.2 kWp.

It is a question of definition if a conventional electric automobile that is charged with solar-produced electricity from an electricity fill-up station could be considered a solar-powered vehicle. An original design is the three-wheeled city-automobile TWIKE, whose electric propulsion can be increased by peddling. In any case, electric automobiles drive through traffic quietly and without exhaust fumes.