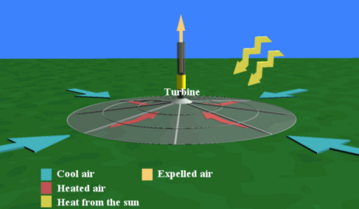 A solar chimney power station, also known as a solar tower power station, is an electricity-generating station based on the simple principle that hot air rises. Surrounding a very tall ventilation tower or chimney is a wide transparent canopy that gently rises toward the center and under which solar radiation is trapped as in a greenhouse. The air underneath the canopy is warmed so that it moves inwards and eventually rises through the central tower. To replace the air that escapes, cooler air from the edge of the canopy flows inward and becomes heated in its turn. Turbines built into the central tower convert the kinetic energy of the hot rising air, by means of a generator, into electricity.

The original idea of the solar chimney power station came from Jörg Schlaich at the Institute for Construction and Design (Institut für Konstruktion und Entwurf), University of Stuttgart. A prototype station in Manzanares, south of Madrid, delivered power, with a peak output of 50 kilowatts, almost continuously from the middle of 1986 until the start of 1989. The Manzanares collector, with a diameter of 240 meters, surrounded a central tower 195 meters high with a diameter of 10 meters. A much larger solar tower station has been proposed in Australia. Called the Solar Mission Project, it would be able to generate 200 MW of electric power – enough for 200,000 homes. Its central tower would rise to around 1,000 meters, making it the tallest engineered structure in the world, and be surrounded by a translucent collector roof approximately 3,500 meters in radius.