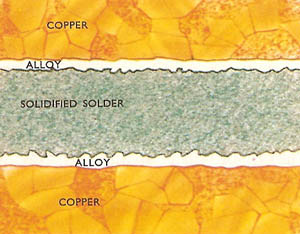 A magnified picture of a soldered joint showing the alloy ("intermetallic compound") which tin (from the solder) forms with the parent metal (in this case, copper). 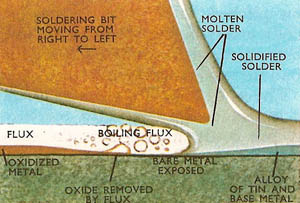 Diagram showing how molten flux removes the oxide layer (left) and is itself displaced by molten solder (right).

Soldering is a means of joining together two metallic surfaces by using metal alloys called solder which have a lower melting point than the metals to be joined. The properties of the soldering metal are such that it not only penetrates rough and undercut surfaces and holds by solidification, but that it also chemically adheres to the metal surfaces, combining with them to form a compound "intermetallic" layer. Tin is a metal which will perform the above function and it therefore forms the basis of the soldering alloys.

In order to carry out the process of soldering satisfactorily it is essential that the parent metals be shaped so that they fit together yet allow the solder to flow between the joint faces, and the faces must be chemically clean. In order to assist this latter point a flux is used. The solder must be selected so that it is capable of forming an intermetallic compound with the parent metal when heated, and sufficient heat must be supplied so that the solder flows freely. The longer the soldering temperature is maintained the deeper the intermetallic penetration becomes.

The metals to be joined together must, after shaping, be cleaned of all grease and dirt. The grease can be removed by using a solvent or vapor. Special precautions are needed with many of these and generally they should not be used in an enclosed or confined space or room. Metals coated with tinplate, or tin-zinc galvanized, or terneplate (an inferior kind of tinplate containing lead), do not generally need further treatment prior to soldering, but other metals should be filed, scraped, wire-brushed, or rubbed with wire wool to provide a good mechanically clean surface. All traces of rust or corrosion must be removed. Industrial parts are frequently cleaned in acid to achieve this.

The function of a flux is to convert the mechanically clean surface to a chemically clean one by removing the oxide layer which forms on a metal exposed to the oxygen of the atmosphere, especially whilst it is being heated to soldering temperature. Removal of the oxide layer allows the solder to come ito direct contact with the parent metals and "wet" the surfaces. If wetting does not take place satisfactorily the solder will remain in beads or globules on the metal surface and the parts will not be jointed properly.

Fluxes are classified as either active or inactive, depending upon their ability to attack the oxide layer on the metal. Active fluxes, which have acid properties, attack and dissolve the oxide layer, but after soldering is complete their residues absorb water from the atmosphere and quickly attack and corrode the parent metals. These residues are difficult to remove. Active flux may be neutralized by adding an equivalent amount of alkali to form a neutral salt, but this does not prevent its residue from corroding the parent metal. However, this type of residue can be removed by washing in a hot, dilute soda (sodium carbonate) solution, followed by a hot water wash. Such a cleaning process cannot be performed when electrical work is involved or when contact with water would be detrimental to the joined parts. It is for this class of work that the inactive or "safe" fluxes are used. Inactive fluxes are composed of substances that do not react appreciably with most metals at room temperature. But when raised to soldering heat they act as fluxes and protect previously cleaned surfaces.

The process of forming a thin layer of solder on each part to be joined prior to assembly is called tinning. It is good practice to do this as it ensures adequate wetting of the parent metal by the solder, improves the flow of solder in the soldering operation, and makes for a better joint.

The bit is the name given to the tool which acts as a reservoir of heat, some of which it gives up to the workpiece during soldering. It stores the molten solder (generally on its tip) and delivers it to the joint or part to be tinned; and finally it is used to remove excess solder from the finished joint.

The bit is generally made of high quality copper which should be free from oxygen. Copper is a good conductor of heat and warms up quickly. It is also capable of being readily tinned with solder. The size and shape of the bit is determined by the type and size of the work to be done. Too small a bit will prevent the easy flow of solder, its heat being given up too quickly, whilst too large a bit is unwieldy and may prevent the solder from cooling sufficiently quickly. As a general rule a 12-ounce bit is used for general engineering work, whilst a 4-ounce bit is suitable for small electrical joints. The hand bit may be heated by a gas flame or alternatively an electric soldering iron has a built-in heating element.

Preparation of the bit for soldering is essential and is carried out by first filing the tip so that it is clean and smooth. Then with some ammonium chloride (sal ammoniac) crystals (a flux) placed on the hollow side of a brick the bit should be heated until it will melt with some solder readily. The bit should then be rubbed together with the solder and ammonium chloride against the brick until its faces are tinned with solder. Any excess solder should be wiped off with a clean cotton rag. This process must be repeated whenever the faces become tarnished or dirty in use.

The composition of solders are defined by the percentage of tin, lead, antimony, or silver they contain, and are selected for use depending upon the working conditions of the joint, the type of joint to be made, and the metals to be joined.

Soft solders are usually alloys of lead and tin and have melting points between 200° and 300°C. Common examples are:

Hard solders contain significant amounts of silver and have a much higher melting point. Brazing solders are alloys of copper and zinc and melt at more than 800°C. (Brazing is a process that takes place at a higher temperature than normal soldering.)


Metals that can be soldered

Lead, copper, silver, sheet steel, tinplate, and tin-zinc galvanized metal can, with care, be readily joined by soldering, but brass may present some difficulty depending upon its composition. Bronzes and gunmetals, too, may require special care, but aluminum and silicon-bronze, beryllium-copper, cast iron, stainless and alloy steels need special fluxes. Zinc-based die castings and aluminum are extremely difficult to solder and call for special treatment.