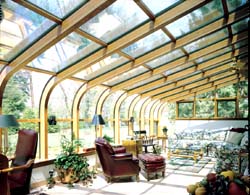 A sunspace is a room that faces south (in the northern hemisphere), or a small structure (also called a conservatory) attached to the south side of a house.

A properly designed sunspace can provide a bright and useful alternative to the typical space within a house. It also functions as a solar heater, augmenting the home's winter need for space heating. There are two basic considerations for optimizing the solar heating potential of a sunspace: the directional orientation and the angle of the glazing.

In general, a south-facing orientation, within 30° east or west of true south, will provide around 90% of the maximum static solar collection potential. The optimum directional orientation will depend on site specific factors that may determine where a sunspace can be located and on local landscape features such as trees, hills, or other buildings that may shade the sunspace during certain times of the day.

The angle of the sunspace glazing is the next most important consideration for solar heat gain and the overall performance of the sunspace. Sunlight most efficiently passes through glazing positioned at a right angle to the sun's rays. Obviously you won't be able to change the glazing angle to maximize sunlight penetration as the sun's position changes during the day and seasonally. The angle that will be optimal for collecting sunlight during the heating season will depend on the climate, latitude, and the desired amount of solar heat gain in the sunspace. The angle for maximum winter heating is roughly 10° to 15° steeper than the site latitude. For example, the slope of sunspace glazing in Syracuse, New York, at 43° North latitude, would range from 53° to 58° from the horizontal.

However, optimizing the angle to maximize winter solar gain by sloping the glazing, may not be the overall best design for your sunspace. There are a number of issues that should be considered for selecting the "optimum" angle.

First, glass and plastic have little structural strength. When installed vertically, glass (or plastic) bears its own weight. This is because only a small area (the top edge of the glazing) is subject to gravity. As the glass tilts off the vertical axis, however, an increased area (now the sloped, cross-section) of the glazing has to bear the force of gravity. Glass is also brittle; it does not flex much before breaking. To counteract this, you usually must increase the thickness of the glazing or increase the number of structural supports to hold the glazing. Both increase overall cost, and the latter will reduce the amount of solar gain into the sunspace.

Another common problem with sloped glazing is its increased exposure to the weather. Hail, sleet, snow, and wind also may cause material failure. For occupant safety, regulatory agencies usually require sloped glass to be made of safety glass, laminated, or a combination thereof.

It is also difficult to control solar heat gain in a sunspace with sloped glazing during the summer and even during the middle of a mild and sunny winter day.

Therefore, vertical glazing is the overall best option for sunspaces for much of the United States. Vertical glazing accepts almost as much winter solar heat as sloped glazing, without most of its disadvantages. A vertical wall can support larger areas of glazing relative to necessary structural support area. The glazing is easier to install and less susceptible to leaking. Shading the sunspace during the summer is also easier to achieve. A well-designed roof overhang will shade south-facing vertical glazing during the summer, while allowing winter solar heat gain. Movable insulation and shading devices such as blinds are much easier to install and use.

Sidewall glazing – the glazing on the wall at the side of the space – is not recommended for sunspaces. If you do plan on having some sidewall glazing, however, place it on the east side, not the west. The sunlight entering east-facing glazing occurs early in the day, is less likely to cause unwanted solar gain in the summer as afternoon solar gain. A solid, insulated wall on each side of a sunspace is preferred because it protects the space from unwanted solar gain and nighttime heat loss.