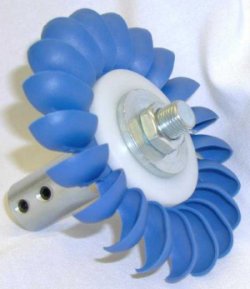 A small Turgo runner made by Joseph Hartvigsen for use in a microhydro system. 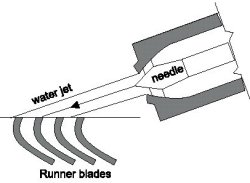 A Turgo turbine is a type of impulse turbine that is similar to Pelton turbine but can handle higher flow rates although it is somewhat less efficient. The runner (wheel) of a Turgo turbine is like a Pelton wheel sliced in half. The incoming jet of water strikes the plane of the runner on one side – usually at an angle of about 20° – and exits on the other. The fact that the incoming and outgoing jets don't interfere (as they do in the case of the Pelton turbine) means that the Turgo wheel can handle a higher flow rate. Also, because the Turgo runner is effectively a Pelton runner split down the middle it can generate the same power as a Pelton wheel with twice the diameter and thus has twice the specific speed of the Pelton. On the other hand, a Turgo runner is more difficult to make than a Pelton and the vanes of the runner are not as sturdy as Pelton buckets.

With their smaller, faster spinning runners, Turgo turbines can sometimes be connected directly to a generator rather than needing an expensive speed-increasing transmission.

Turgos operate in a head range where the Pelton and Francis turbines overlap. Although there are many large Turgo installations, they are especially also popular for microhydro power applications.