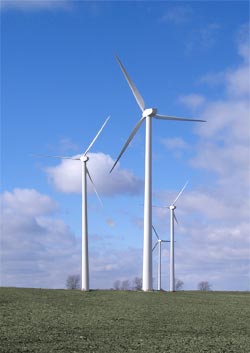 A wind energy conversion system is an apparatus for converting the kinetic energy available in the wind to mechanical energy that can be used to power machinery (grain mills, water pumps, etc) and/or to operate an electrical generator. See also wind energy. Thanks to extensive R&D efforts during the past 30 years, wind energy conversion has become a reliable and competitive means for electric power generation. The life span of modern wind turbines is now 20-25 years, which is comparable to many other conventional power generation technologies. The average availability of commercial wind power plants is now around 98%. The cost of wind power has continued to decline through technological development, increased production level, and the use of larger turbines.