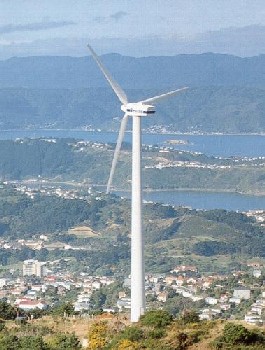 Tower height is an important factor in the design of horizontal-axis wind turbines (HAWTs). The wind blows faster at higher altitudes because of the drag of the surface (sea or land) and the viscosity of the air. The variation in velocity with altitude, called wind shear, is most pronounced near the surface. Typically, in daytime the variation follows the 1/7th power law, which predicts that wind speed rises proportionally to the seventh root of altitude. Doubling the altitude of a turbine, then, increases the expected wind speeds by 10% and the expected power by 34%. Doubling the tower height generally requires doubling the diameter as well, increasing the amount of material by a factor of eight.

In night time, or better: when the atmosphere becomes stable, wind speed close to the ground usually subsides whereas at turbine hub altitude it does not decrease that much or may even increase. As a result the wind speed is higher and a turbine will produce more power than expected from the 1/7th power law: doubling the altitude may increase wind speed by 20% to 60%. A stable atmosphere is caused by radiative cooling of the surface and is common in a temperate climate: it usually occurs when there is a (partly) clear sky at night. When the (high altitude) wind is strong (10 meter wind speed higher than approximately 6 to 7 m/s) the stable atmosphere is disrupted because of friction turbulence and the atmosphere will turn neutral. A daytime atmosphere is either neutral (no net radiation; usually with strong winds and/or heavy clouding) or unstable (rising air because of ground heating -by the sun). Here again the 1/7th power law applies or is at least a good approximation of the wind profile.

For HAWTs, tower heights approximately twice to triple the blade length have been found to balance material costs of the tower against better utilisation of the more expensive active components.