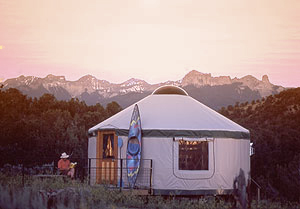 A yurt is an octagonal shaped shelter that originated in Mongolia. It can be easily assembled, taken apart, and transported. The yurt consists of a wooden frame, carrying a cover made of felt. The frame consists of one or more lattice wall-sections, a door-frame, roof poles, and a crown. Some types of yurt have one or more columns to support the crown. The frame is held together with one or more ropes or ribbons. The (self-supporting) wood frame is covered with pieces of felt. Depending on availability, the felt is additionally covered with canvas and/or sun-covers.

Enthusiasts in other countries have taken the visual idea of the yurt and adapted it to local circumstances. Although these structures may be copied to some extent from the originals found in Central Asia, they have been greatly changed and adapted and are in most cases very different.

In the United States and Canada, yurts are made using hi-tech materials. They are highly engineered and built for extreme weather conditions. In addition, erecting one can take days and they are not intended to be moved often. Often the designs of these North American yurts barely resemble the originals.

In Europe, a closer approximation to the Mongolian and Central Asian yurt in production in several countries. These tents use local hardwood, and often are adapted for a wetter climate with steeper roof profiles and waterproof canvas.