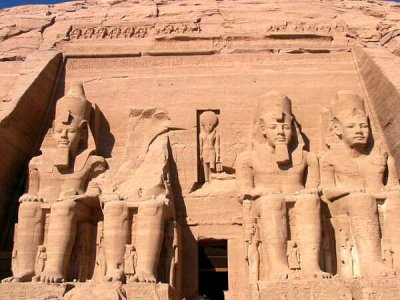 The temple of Ramses II at Abu Simbel.

Abu Simbel is the site of two immense sandstone temples carved by order of Pharaoh Rameses II (c. 1304–1273 BC) out of the bank of the Nile near Aswan. The temples were relocated in the 1960s when the rising waters of the newly-constructed Aswan High Dam threatened to submerge them. Between 1964 and 1968, both temples were dismantled and moved 65 meters (213 ft) up onto the plateau of the cliffs they once sat below and rebuilt 210 meters (690 ft) to the northwest of their original location. Abu Simbel is now a world heritage site.

The twin temples at Abu Simbel stand as monuments to Rameses II himself and his queen Nefertari, to commemorate the alleged victory of Ramses at the Battle of Kadesh, and also to intimidate his Nubian neighbors.

Four huge 20-meter (65-ft) high statues of the pharaoh, in pairs, flank the entrance to the temple of Rameses. The head and torso of the statue to the left of the entrance fell during ancient times, probably due to an earthquake. This temple faces the east, and Re-Horakhty, one manifestation of the sun god, is shown inside the niche directly above the entrance. The alignment of the temple is such that twice a year the sun's rays penetrate into the innermost sanctuary to illuminate the seated statues of Ptah, Amun-Re, Rameses II, and Re-Horakhty.