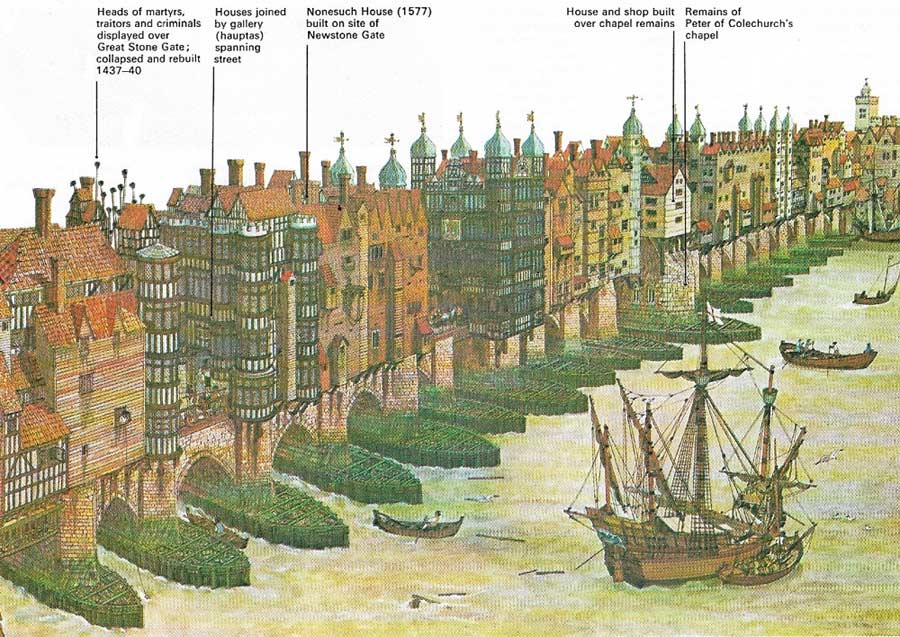 Fig 1. Old London Bridge was designed by a priest. Finished in 1209 after 30 years of toil, it had piers built on heaps of rubble dumped in the river and held in place by encircling rows of closely spaced wooden piles driven deep into the river bed. Over one of the piers stood a chapel dedicated to Thomas a Becket. The sixth span from the south was a timber draw span, which could be opened for tall ships to pass. Multistoreyed houses and shops were built along the bridge with a wide enclosed corridor forming the roadway below. These buildings were destroyed by fire on several occasions and rebuilt each time in the current architectural style. The bridge's 20 pointed arches varied in span from 4.5 m (15 ft) to 10.5 m (34 ft), the piers occupying half the total river width. For many years London's only dry crossing, old London Bridge stood for more than six centuries before being replaced in 1831. 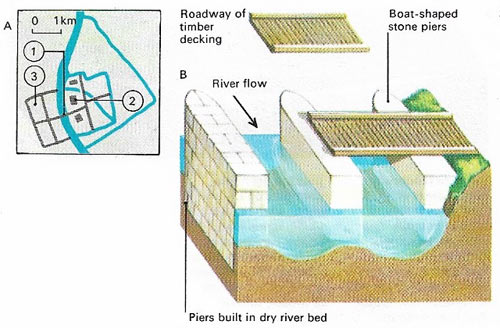 Fig 2. This drawing of the Euphrates bridge (B) at Babylon has been projected from ancient records. (A) The bridge (1) connected the old city (2) with a newer residential suburb on the west bank (3) of the river. 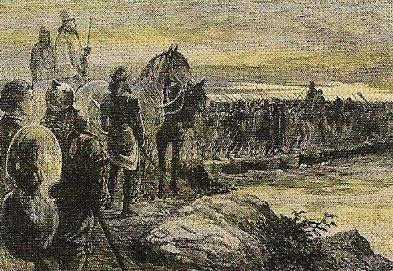 Fig 3. A unit of King Xerxes' army of 480 BC crosses the Hellespont by a bridge of boats in this artist's impression. Alexander the Great crossed the Indus in India on a pontoon bridge. 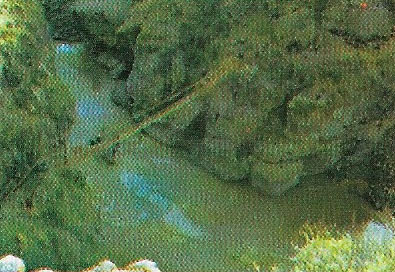 Fig 4. Suspension bridges built from jungle creepers and stakes have been used for centuries by primitive societies in hilly regions. This Indian bridge in Peru is a typical modern example. 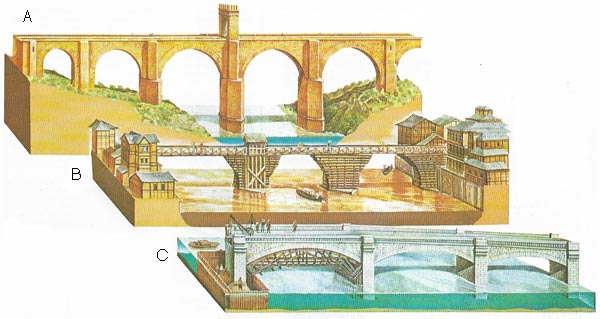 Fig 5. (A) A most impressive Roman bridge was built over the River Tagus at Alcantara, Spain. Finished in AD 109, it was 204 m (670 ft) long with six stone arches and stood 52 m (170 ft) above the water. The Romans built aqueducts in a similar way, to carry the water supply to Rome. Some of these also had a roadway. All Roman arches were semicircular, giving the name Romanesque to this type of arch. (B) This timber cantilever bridge is of a type that has stood for centuries in Srinagar, capital of Kashmir. Built on stone foundations these bridges have log piers spanned by Indian cedar. (C) The Pont de la Concorde, Paris was completed in 1791 by Jean Perroner. He was the engineer who replaced the circular arch with the more graceful ellipse,later to be widely copied by others. The arch under construction is shown supported by timber falsework, and a coffer dam enclosing the pier helps keep out the water.

Fig 6. (A) The stayed suspension bridge at Niagara Falls, completed in 1855 by John Roebling (1806–1869), had a rail track above and a road below. Spanning 250 m (820 ft), the main supports for the rail and roadway were cables of wrought iron wire. The stays anchored the structure and reduced vibration in it in winds or when trains passed over it. The decks were hung on wires from the cables. (B) Eads' bridge over the Mississippi at St Louis was opened in 1874. It was the world's first major steel bridge and carried a roadway above a rail track. The center arch is 156m (512 ft) in span; the others 6 m (20 ft) less. Eads sank the foundations down to rock using pressurized caissons to exclude water from the working area on the riverbed. The main arch had to give sufficient room above the water-level for boats to pass. 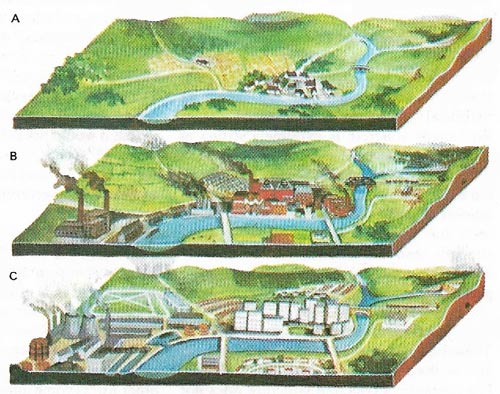 Fig 7. Bridges as a means of transporting people or goods have evolved to meet the needs of society. In medieval times (A) road bridges were used in conjunction with ferries. In the 19th century (B) these were supplemented by rail bridges and in modern times (C) by flyovers and multipurpose bridges.

The earliest bridges were probably logs thrown across streams or the stone slab "clapper" bridges such as those still surviving in Devon, England. Another type of water crossing was provided by bridges formed of boats fixed together. The Greek historian Herodotus (c. 485–425 BC) provides the earliest record of a more permanent structure. This crossed the River Euphrates at Babylon about the eighth century BC.

Less durable perhaps, but certainly as remarkable technically, was the bridge of boats built for King Darius (548–486 BC) in 512 BC. It enabled the advancing Persian army to cross the Bosporus and invade south-eastern Europe. Darius's successor Xerxes (c. 519–465 BC) instructed his engineers to repeat the Bosporus exercise on the Hellespont (now the Dardanelles) (Fig 3). On this occasion two bridges using 674 boats were built side by side spanning 1.4km (0.87 mile).

Rivers in mountainous country pose different but equally difficult problems and provoke some equally impressive solutions. Fa-Hsien, a Buddhist monk, writing in AD 412, came across a 92m (300ft) bridge of ropes traversing a deep ravine while he was travelling in India. This form of primitive suspension bridge is known to have been widely used in South America, Central Africa, Southeast Asia and China as well as in India. Jungle creepers served as ropes for many of these bridges, woven split bamboo being used in the construction of others. The Incas of Peru were still building such bridges to carry mountain roads over ravines as late as the sixteenth century (Fig 4).

The Romans developed the art of bridge building, like most things they tackled, systematically. The Pons Sublicius built over the River Tiber in Rome in 621 BC was 150 m (492 ft) long and famous for being defended by Horatius in 508 BC. Built entirely of timber, it was founded on timber piles driven deep into the river bed. The most remarkable Roman timber bridge was the 420 m (1,378 ft) structure built across the River Rhine in 50 BC. The last plank was placed in position just ten days after Julius Caesar had ordered the bridge to be built.

The Romans' legacy to bridge building was the heavy masonry arch bridge, hundreds of which were built throughout Europe (5). In this, large stone blocks were wedged against each other to form an arch. The central stone at the top of the arch was known as the keystone. The finest surviving example of such a bridge is the Pons Fabricius in Rome. Completed in 62 BC the bridge (now called the Ponte Quattro Capi), has two fine semicircular arches each spanning 24 m (78 ft). A small "relief" arch in the central springing of the two main arches releases excess water in times of flood.


Priests and professionals take over

So prolific and efficient was Roman building that it was hundreds of years before Europeans took to bridge building anew. Then, surprisingly, it was the Christian Church which, recognizing the advantages of good road communications in a developing society, took the lead. In France a group of interested priests formed a new order, the Freres du Pont, to design and build lasting bridges. Most famous of this order's works was the Pont d'Avignon built in 1177 over the River Rhone. It had 21 arches in all, the longest being 35 m (115 ft) in span. Likewise in England it was Peter de Colechurch, a chantry priest, who conceived, designed and eventually built the first stone bridge over the Thames – the famous multi-span London Bridge (4).

Until the late seventeenth century bridges continued to be designed and built largely by priests or architects with a flair for engineering. In Florence the local chamber of commerce commissioned the architect Taddeo Gaddi (c. 1300–1366) to replace the Ponte Vecchio, which had been destroyed by flood. Gaddi's chief design innovation, incorporated in his bridge over the River Arno, was arches that were only part of a semicircle. Gaddi's idea was adopted by the architect-priest Giovanni Giocondo (c. 1433–1515). He used the segmental arch in Paris's first masonry bridge, built in 1507.

Such complex and essential work could not rest in the hands of gifted amateurs for ever. In 1716, following the work of French army engineers, France stole a march on the rest of the world by forming the Corps des Ingenieurs des Ponts et Chaussees (Corps of Bridge and Road Engineers). Jean Rodolph Perronet, chief engineer of the corps, replaced the segmental arch with the even more daring and flatter elliptical shape (7).

In 1779 the first bridge to be made of iron was built across the River Severn, England, at Coalbrookdale. The iron ribs and plates were cast at the local works of the ironmaster Abraham Darby. Wrought iron was the next major material for bridges and Thomas Telford (1757–1834) used it for the chains of his 178 m (580 ft) bridge of 1826, which spanned the Menai Strait to link Wales and Anglesey. Robert Stephenson's (1803–1859) nearby tubular railway bridge (1850) also used wrought iron. For long-span railway bridges carrying heavy loads, an arch or cantilever is the best design. An early bridge of this type was the steel arch over the River Mississippi at St Louis (1874) by James Eads (1820–1887).