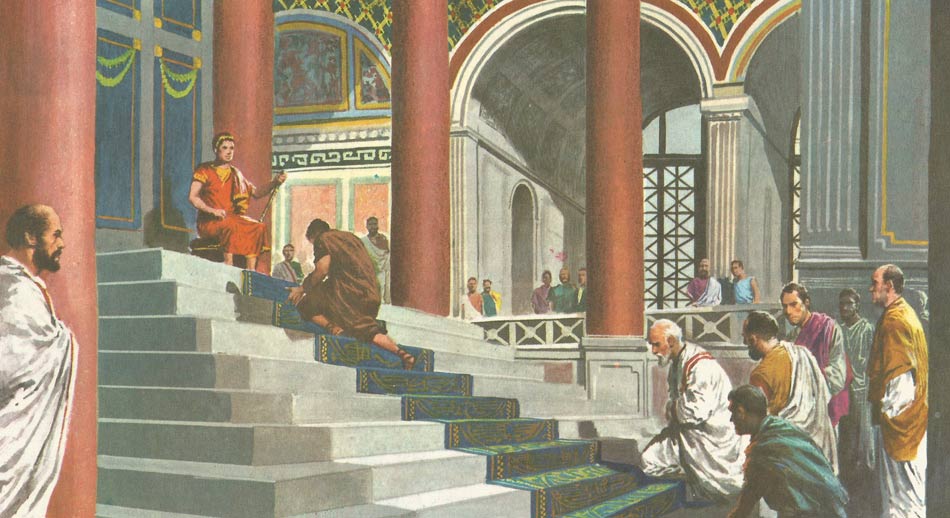 To reinforce his authority as Emperor, Diocletian demanded that his subjects worship him as a god, prostrating themselves before him. 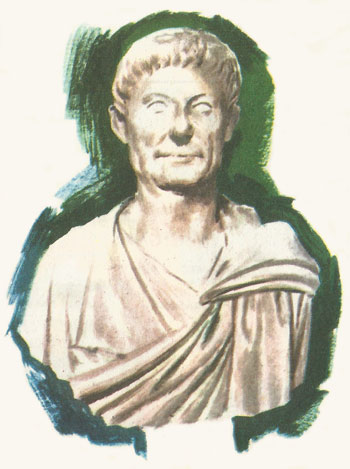 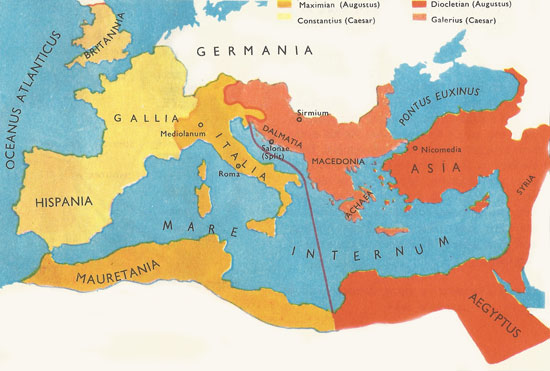 The Roman Empire under Diocletian.

On September 17, 284, the Emperor Numerian was found dead in his litter, near Nicomedia. For more than 50 years the Empire had been involved in exhausting and expensive wars against the Germanic tribes who were pushing down from the north. A strong and vigorous leader was needed. Fortunately, the troops, who acclaimed asEmperor the commander of the imperialbodyguard, chose well. The new Emperor was Valerius Diocles, henceforth known by the more impressive name of Diocletian.

Diocletian was not of noble birth. His father was said to have been a mere clerk, and an ex-slave, but this did not really matter, for this was the age of soldier-emperors. Diocletian had to move at once to defend his title against a rival, Carinus, who held Italy. He marched west, and early in 285 defeated Carinus on the river Margus.

But although he was a competent general, Diocletian's greatest achievements were to be peaceful ones. He preferred planning and reconstruction to fighting. And such was his genius that his reforms changed the face of the Empire; and gave it new strength to resist barbarian invaders.

The Empire was faced by aman of problems. The most pressing was the ever-present threat from the barbarian tribes. But Diocletian had also to check the extrem power of the army, and ensure that the next emperor was appointed by himself, and not acclaimed by the troops in some distant province – as he himself had been. Thirdly, he had to reform the Empire's finances, which were in such a muddled state that many soldiers and civil servants were paid in rations (annona) rather than coinage. And – the most difficult task of all – he had somehow to restore the jaded spirit of the Empire and give people confidence. He had also to persuade people to get back to the land and work hard again, for the looting and burning of the invading tribes, the economic chaos, and the disorder of the last half century had caused many farmers to give up their work and drift into the big towns. And agriculture was essential to the prosperity of the Empire.


The division of the Empire

Early in his reign Diocletian decided that the difficulties of ruling the Empirewere too much for one man. As hisassistant he chose the soldier Maximian. Diocletian, as the supreme rulers of the Empire, was Augustus; Maimian, as his second in command, bore the title Caesar. Previous emperors had chosen a Caesar as assistant; but Diocletian went further, and soon raised Maximian to the rank of Augustus.

In theory the Empire was now ruled by two equal colleagues; but in practice Diocletian remained the master. To emphasise his seniority he took the name Jovius, signifying that he was the representative on Earth of the supreme god, Jupiter. Maximian was also called Herculis after the hero and lower god, Hercules.

However, even two emperors were not enough to rule such a vast empire, and in 293 Diocletian split the Empire into four parts (as shown in the map), and founded the system known as tetrarchy. He himself, as Augustus of the east, took Galerius as his Caesar. Maximian, as Augustus of the west, took Constantius Chlorus, the father of the future Emperor Constantine the Great, as his. To set the seal on the new arrangement, Galerius married Diocletian's daughter, Valeria, and Constantius married Maximian's daughter, Theodora.

This tetrarchy, or rule of four, had two great advantages. First, it meant that the Empire could be easily defended on all its frontiers. One of the four rulers could soon be on the scene if any danger arose. Moreover, it was now less likely that the army would acclaim some over-powerful general as Emperor. The four rulers would keep all the power for themselves, and the new system would solve the problem of the succession; for Diocletian clearly intended that the two Caesars should eventually take over the Empire when he and Maximian either retired or died.

The new system worked well. Diocletian's authority was so great that his three colleagues, although they were ambitious and powerful men, remained completely loyal to him throughout his long reign. The four rulers were able to devote their energies toward crushing Rome's enemies, rather than fighting each other and wasting the resources of the Empire in perpetual civil wars, as their predecessors had done. In the west, Maximian campaigned successfully against the Alemanni, crushed a rebellion of discontented peasants known as the Bagaudae, and pacified Africa. His Caesar, Constantius, dealt defensively with a rebellious officer, Carausius, who had proclaimed himself Augustus in Britain. In 296 Constantius recovered Britain from the rebels, and the island entered on a new age of prosperity. Two years later Constantius gained a spectacular victory over the Alemanni in Gaul. Meanwhile in the east, Galerius, after an initial defeat, beat the Persian king Narses. And when the eastern frontier had been strengthened, the Empire appeared to be safer and stronger than at any time in the last 75 years.

All this time Diocletian was at work, reorganizing the workings of the Empire. He had a methodical – some would say fussy – mind. The effect of his reforms was to increase the majesty of the emperor, who became, with his luxurious court, like one of the absolute monarchs of the Hellenistic age; and to create a vast and complicated machinery for running the Empire. Diocletian reduced the larger provinces to a manageable size. Even Italy, for the first time, was divided up into provinces just like the rest of the Empire.

In some of the old provinces the governor had been in command of the army. Diocletian changed this; from now on the provincial governor never had the command of an army, and so ceased to be a threat to the emperor's authority.

Not everyone liked these complicated reforms; one historian wrote that there was a great host of governors, officials, accountants, controllers, and deputies, who spread terror by confiscating goods and by forcing people to join the army. And the larger army and the hundreds of new administrative jobs were extremely expensive, and caused great hardship among the ordinary people. The harsh system of tying citizens down to their jobs probably began under Diocletian. Many, for instance, were forced, whether they liked it or not, to work on the land in one place all their life.