For many hours the Normans could not break the English line. 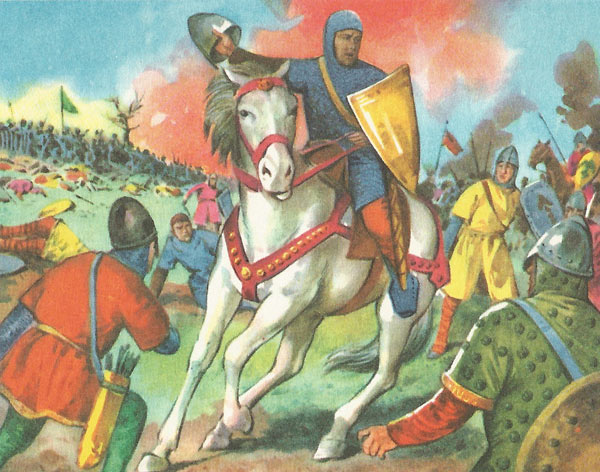 Duke William at the battle. At one point he was believed to have been killed.

The Bayeux Tapestry is perhaps the most famous piece of embroidered cloth in the world. Two sections of it are shown in the illustrations above. It is over 230 feet in length and just over 20 inches high. It tells in pictures he whole exciting story of the events leading up to and including the battle of Hastings.

In January 1066 the English king Edward the Confessor died, leaving no direct heir. To the empty throne there were three claimants. There was the English prince Edgar the Atheling; there was Harold Godwinson; and there was William, Duke of Normandy. Of these, Edgar had the best claim by birth; Harold was the most powerful man in the country and had, so it was said, been named as the next king by Edward on his deathbed; William had also been promised the throne by Edward, and Harold had once sworn to support him.

In the event the matter was settled by force. Harold seized the throne and was supported by most, but not all, of the country. William regarded this as a flagrant breach of faith and immediately started to prepare invasion.

On equal terms, Harold had a very good chance of defeating William: he had an excellent army and was himself a very capable commander. Unfortunately, however, he had to fight two enemies at once, and it so happened that they both arrived at almost the same time – the King of Norway in the north and the Duke of Normandy in the south.

In this emergency Harold was magnificent. He at once marched north and inflicted a crushing defeat on the Norwegians at Stamford Bridge. Immediately after the battle he heard that William landed in Sussex, and he had to dash down south again. On reaching London, Harold heard that William was being very cautious: he was not advancing inland but clinging to the coast. Without waiting for the remainder of his army to catch up with him, Harold at once set out to give battle. In this he probably made a serious mistake – those extra troops might have made all the difference at the forthcoming battle. William heard with relief of the approach of his adversary: he left camp at Hastings and moved in to attack.

The English position at Senlac was a strong one. The army was drawn up along a ridge from which the land sloped gently away. The flanks were protected by a stream on one side and a very steep slope on the other, so it was impossible to turn the position and get round behind; a frontal attack uphill was the only possible course. The English soldiers lining the ridge stood shoulder to shoulder – so close that their shields formed a kind of wall. Included in their ranks were the famous Housecarles, the flower of Harold's army and perhaps the best infantry in Europe. Unfortunately there were other less distinguished troops – the men of the militia, part-time soldiers who had been hastily called from their farms. For weapons the English relied on the Javelin, pike and battle-axe; they had practically no archers or cavalry.

With the Normans it was quite different. The flower of their army was their cavalry, heavily armored and depending on the lance and the sword. Their infantry consisted mainly of archers.

The battle started at nine in the morning of October 14, 1066. The Norman archers advanced and took up their positions, happy in the knowledge that there would be almost no return fire from the English.

Calmly and unhurriedly they let fly a hail of arrows on the English line. It soon appeared, however, that this was having little effect; most of the arrows were landing harmlessly on the wall of shields which the English had formed. After a time the archers ran out of arrows and had to withdraw.

Despite this setback, William decided to proceed with the next phase of the attack and sent in his infantry. And now at last the English were able to hit back. As soon as the Normans, struggling desperately up the hillside, came into range, the wall of shields was lowered and the English took their javelins. Flung with immense force from a superior ground, these pierced the Norman armor like butter. Everywhere along the line the attack was beaten back. On the left the Norman troops turned tail and fled. Now Harold had given strict and sensible orders that on no account were the English to leave their line. But the sight of a fleeing enemy was too much for some of the men of the unreliable militia, and with wild yells they gave chase. At the bottom of the hill they pain the penalty for their disobedience and were soon destroyed by the Norman cavalry.

Still the English line was intact: William's opening attacks had been completely unsuccessful. Now he sent in his cavalry, but this was to be beaten back. It seemed that in hand-to-hand fighting at close quarters the English were invincible. Their battle-axes (which the Normans had spurned as old-fashioned) proved deadly. Wielded with terrific power, they crashed through the Norman helmets as if they were nutshells. Time and time again the Normans were beaten back with fearful slaughter.

However, William was a resourceful commander. He had seen the failure of the first Norman attacks, and had himself at one point been unhorsed, but he still had something in reverse. It is not known for certain how he finally broke the English line. There is the story of the ruse that he lured the English from their position by pretending to flee. It seems that he had considerable success by ordering his archers to fire into the air so that their arrows dropped down on the English line from above. It may be that under this barrage he delivered a combined infantry and cavalry attack.

There can, perhaps, be little doubt that the end of the battle came with the death of Harold. In those days the loss of the army commander was of tremendous importance – the whole direction of the battle was lost. The circumstances of Harold's death are not known for certain. The most important bit of evidence we have today, as indeed for all the battle of Hastings, is the Bayeux Tapestry. Here can be seen the words 'HIC HAROLD REX INTERFECTUS EST' (Here King Harold has been killed). For many years it was believed that Harold was the man pulling the arrow out of his eye; this was assumed because the word 'Harold' appears directly above him. Today some people believe that it is more likely that Harold is the man sinking to the ground underneath a Norman horseman. Their reason for this belief is that in this particular scene this man is the most important and prominent figure.

After the death of Harold the Normans gained a complete victory, which meant that England was to have new rules who would impose their customs and language on the country, and whose influence on her history was to be enormous.