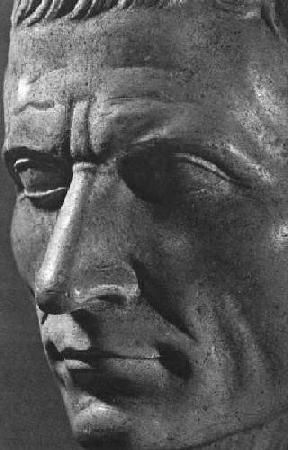 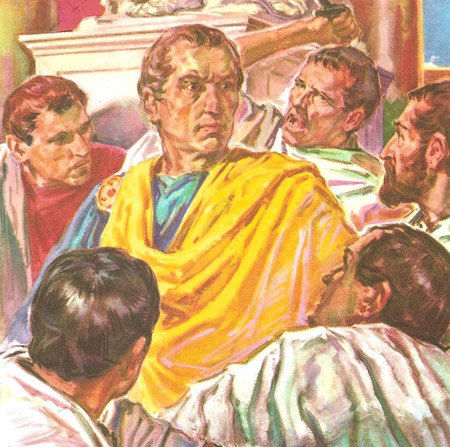 Once when the Roman legions were crossing the Alps, they came across a small mountain village. It was very primitive: the houses were made of mud and wattle; the inhabitants were poor; and to one accustomed to the civilization of Rome it must have seemed very wretched.

The Roman army halted for a while and one of the officers approached the commander, Julius Caesar. "Caesar," he said, "see what a miserable village that is. And yet there is without doubt some man who is proud to be its chief."

Caesar replied: "I would rather be the chief pf these mountain people than the second man in Rome." This remark gives us an insight into Caesar's character.


The rise of Caesar

Julius Caesar was born in Rome in the 653rd of the foundation of the city; that is about 100 years before the date conventionally given for the birth of Jesus. His father's name, like his, was Julius Caesar; his mother's name was Aurelia. They were a noble and ancient family and claimed to be descended from Aeneas, the famous Trojan warrior, who was believed to be the founder of Rome.

Nothing is known of Caesar's childhood, but as a young man he had the reputation of being intelligent and rather vain; he took great trouble with his appearance and was noted for his cleanliness. At the time civil war was raging in Rome between the patricians (aristocrats) and the plebeians (common people). The former were led by Sulla nd the latter by Marius, who was Caesar's uncle by marriage. Because of this and because of the support he gave to Marius, Caesar was in some danger when Sulla was eventually victorious. For a time he found it prudent to withdraw to Rhodes where he took lessons in the art of oratory.

Caesar's exile did not last long. Soon he was back in Rome, making a name for himself as an advocate in the law courts. Many people, including his enemies, began to notice a strange magnetism and strength about him. The poor people worshipped him and looked on him as their champion. At the same time he became friendly with two of the most important men in Rome: Crassus, a man of great wealth, and Pompey, the great soldier. With their aid Caesar was elected to a number of public offices: quaestar in 68 BC, aedile in 65 BC, and then two years later, Pontifex Maximus, or High Priest. This was an astonishing appointment, as Caesar had frequently said that he thought many of the Roman religious ceremonies were nonsense. In 61 BC Caesar became governor of Spain, and had his first experience of commanding troops in battle.

Caesar remained in Spain for only one year. When he returned to Rome he found the government in a state of collapse, and so he joined Crassus and Pompey to form the First Triumvirate – which means rule by three men. In 59 BC Caesar was elected to the highest office, that of consul. Two consuls were appointed every year for a period of one year. Caesar's colleague was a foolish man who spent most of his time looking for omens in the sky. Later people used to refer jokingly to the time when Julius and Caesar were consuls. At the end of his year as consul Caesar was appointed governor of northern Italy and southern France.


The conquest of Gaul

When Caesar arrived in Gaul few people can have thought that this middle-aged politician was going to prove himself one of the greatest soldiers of all time. Yet in the next eight years he achieved fantastic success. The Celtic tribes of Gaul were conquered and the country incorporated into the Roman Empire. Invading tribes from Germany were hurled back, and when they persisted in returning, Caesar crossed the Rhine and taught them a severe lesson. Soon after this he embarked on his most exciting venture: the invasion of Britain (see Caesar in Britain). This was not particularly successful, but the story of his visit to this mysterious island must have caused great excitement in Rome.

One of the main features of Caesar's army was that it could put its hand to anything. It constructed a bridge across the Rhine in ten days; when a fleet was necessary, it built one and gained a victory at sea. Also, of course, it could win battles against overwhelming odds.

In his conquest of Gaul Caesar did not rely on military force alone; he also used all his skill as a diplomat. One Gallic tribe was induced to join him against another, so that he never had to fight all the Gauls at once.

At last Caesar decided to return to Rome. Although his victories had caused great joy, the Senate was frightened of Caesar's power and distrusted him.

The Senate now joined forces with Caesar's old ally, Pompey, in order to seize power from Caesar. They sought to impose severe restrictions on him, and ordered him to come to Rome alone, unarmed, and stripped of all his offices. For a time Caesar tried to negotiate, but it soon became clear that they wanted him out of the way. Still Caesar hesitated, but then he made up his mind. At the head of the 23rd Legion he crossed the river Rubicon which was the boundary between Gaul and Italy. The die was now cast. The Senate had been disobeyed and civil war had begun. In Italy Caesar's old soldiers flocked to join him. Pompey, seeing that he could not overcome Caesar in Italy, fled to Greece. In due course, Caesar pursued him to Greece and eventually forced him to give battle and defeated him at Pharsalus.

After Pharsalus Pompey fled to Egypt, but the Egyptian king, Ptolemy, seeing which way the wind was blowing, had him murdered. When Caesar arrived a few weeks later, he was (to his utter disgust) presented with Pompey's mummified head. Although his presence was urgently needed elsewhere, Caesar now occupied himself with Egyptian affairs. Ptolemy was deposed and his sister, Cleopatra, made queen. A romantic attachment developed between the old soldier and the beautiful young queen, and Caesar dallied in Egypt still longer. During this time he found himself in grave danger, and for a whole winter was blockaded in the royal palace. A relief army arrived only just in time.

When he left Egypt Caesar carried out a lightning campaign in Asia Minor. It was of this that he wrote his famous dispatch: "Veni. Vidi. Vici." (I came. I saw. I conquered.)

Then at last Caesar returned to Rome. He was now undisputed master of the civilized world. He was made dictator for life and was even regarded as one of the gods. Many problems awaited his attention and he tackled them with all his tremendous energy; he was still in good health, although his fits of epilepsy were becoming more frequent. During this time Caesar made plans for reorganizing the government of Rome and all her provinces. He also reformed the calendar.


The Ides of March

Although many of Caesar's enemies had been killed in the civil war, there were still Romans who hated him and who thought he was going to abolish the republican form of government and make himself king. Several of these men became so alarmed that they plotted together to murder Caesar. On the Ides of March (15) 44 BC Caesar arrived at the Senate. At a given signal the conspirators gathered round and plunged their daggers into his body.