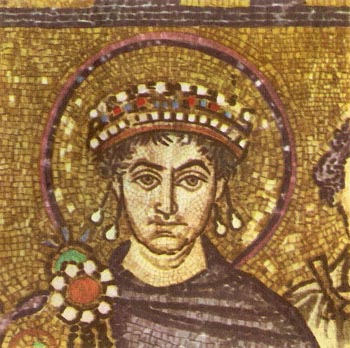 Justinian depicted in a mosaic in the Church of Saint Vitale at Ravenna. 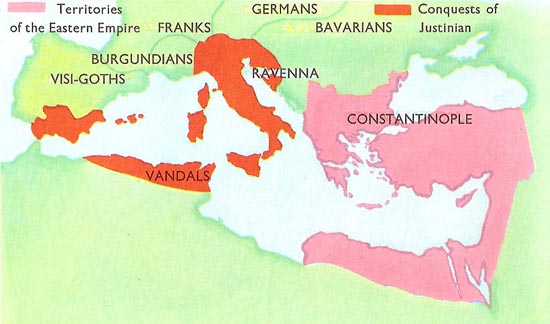 The Eastern Empire and conquests of Justinian.

Justinian was one of the greatest Emperors of the Eastern Roman Empire. This Empire is often called the Byzantine Empire, because its capital, Constantinople, was called Byzantium by the Greeks, who first planted a colony there. The Byzantine Empire lasted for 1,000 years after the Western Empire had fallen. It did not disappear till the Turks took Constantinople in 1453.

In the reign of Justinian the Eastern Empire was at its height. Justinian was born in Illyria (the modern Albania), the son of a peasant. In AD 526 his uncle, Justin, who has started as a private soldier and was now Emperor, summoned him to help govern. A year later Justin died and his nephew became Emperor himself.

Justinian had two firm aims. First, he wanted the old Roman Empire to be reborn through the conquest of all those lands in the West which the barbarians had taken. Second, he wanted to give to this Empire a code of law, based on all the Roman laws from the earliest to those of the Emperor Hadrian (AD 138). He gave this task to a commission of twelve, and in five years they produced the "Codex of Justinian," a mammoth collection of laws whose influence in European history has been enormous.

By Justinian found it more difficult to re-create the Empire which was to use these las. He drove the Vandals from North Africa and the Visi-Goths from south-east Spain. He fought the Ostro-Goths in Italy and set up a provincial capital at Ravenna.But in this drive he had weakened his Eastern frontier so much that after his death in 565 his successors had little time to keep his conquests and were fully occupied with powerful enemies from the East.

Justinian married a comedy actress of the Byzantine hippodrome, Theodora, and elevated her to the position of Empress. She was a woman of great beauty but evil reputation. She was also brave. In the riots between the supporters of the circus charioteers in 532, where much of Constantinople was burned and the Emperor himself threatened, she renewed his courage by refusing to flee. "May I never exist without this purple robe and may I never live to see the day on which those who meet me shall not address me as 'Queen,' she said.